Brand benchmarking is one way to strategically use social listening. As a modern brand manager, you need to understand the online conversations about your brand to gain competitive insights and develop an effective brand strategy. One benchmark metric you can use to evaluate online reputation is share of voice.

Share of voice is the percentage of conversations within a self-defined peer group that occur about your institution.

If you want to improve your visibility among your peer group, it's valuable to know the number of online conversations happening in your entire peer group. To calculate this, you can create search queries for each institution in your peer group and gather social listening data for a predetermined period of time. This compares the mentions of each institution as a whole. The quarterly share of voice for the peer group can be expressed as a pie chart to indicate the changes over time.

Many institutions use share of voice because it's not a real-time measurement that requires constant monitoring. At the Terry College of Business, Mike Horn, Senior Director of Marketing 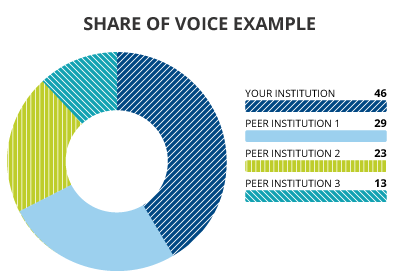 Communications, uses share of voice. He monitors peer and aspirant schools through social listening, but the volume often becomes a lot of noise. Instead, share of voice helps him set a baseline and gain competitive insight comparing the online reputation of Terry with other public business schools in the marketplace.

Build a Case for Brand Marketing

As Mike and his team gather information over time, they create a long-term view of share of voice, which allows them to establish a benchmark and goals. The data demonstrates a return on investment in marketing and communications efforts and shows campus leadership how branding efforts are performing. Theoretically, Terry's share of voice should increase and their peer institutions should decrease. 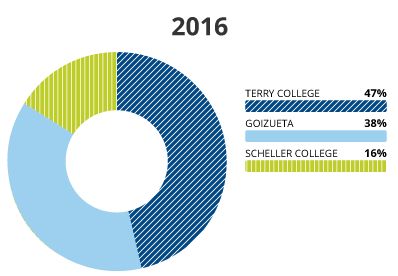 The graphs illustrate the data for Terry over a two-year period. They owned share of voice in 2016, but when they pulled the numbers in 2017, Emory's Goizueta Business School had a huge increase. Interestingly, Terry had almost the exact same number of mentions in 2017 as they had in 2016, but Goizueta's number of mentions had increased six fold—most likely due to a research study about the NFL's best and worst fan bases that was shared widely. Share of voice tracks all marketing and branding tactics, not just the media 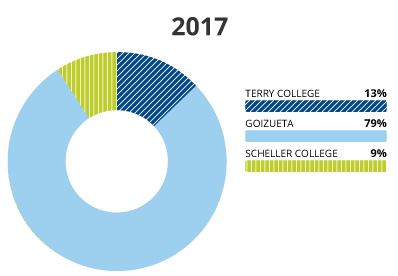 mentions that are traditionally tracked. In this instance, measuring share of voice allowed Terry to quantify the impact of a viral piece of content marketing produced by one of their peer institutions.

As you track share of voice, you can identify changes over time that correspond to your brand marketing investments. This allows you to see what's working and what's not working. Although Mike currently pulls Terry's data every six months, ideally he would pull it once a day so he could better match his activity to his spend. This would help him more successfully track the impact of his marketing efforts and have more flexibility to make changes based on the data.

Share of voice is just one strategic use for social listening, and one of many metrics you can use to understand the online conversation about your brand. Watch the Brain Waves blog for other ways you can strategically impact your social listening and profiles of other campuses already using some of the strategies.