A Little Less Conversation and a Lot More Negativity

Today’s Briefing analyzes publicly available online conversation in the U.S. and on Reddit and YouTube (which span beyond the U.S.) about the coronavirus and higher education from April 7–12. In this analysis of volume, topics, sentiment, and key audiences, we highlight conversations about internship changes and speculation about the fall semester.

If you’d like to receive each Briefing in your inbox as soon as we publish it, sign up at info.campussonar.com/covid19. You can also review all prior Briefings. Because of the changing nature of social media data and our understanding of the conversation, each briefing covers a distinct point in time. Comparisons from briefing to briefing may be helpful, but we can’t draw correlations like we could if we were using other datasets such as surveys or historical social media data.

We identified about 390,000 mentions of the coronavirus and higher education April 7–12, ranging from 37,000–79,000 mentions per day. This is about 42 percent fewer mentions than the same period one week earlier. It’s also a steeper decline than we’ve seen over the last few weeks, which is somewhat expected with a holiday weekend. Weekday volume, including April 10 (Good Friday), was fairly consistent ranging from 69,000–79,000 mentions. 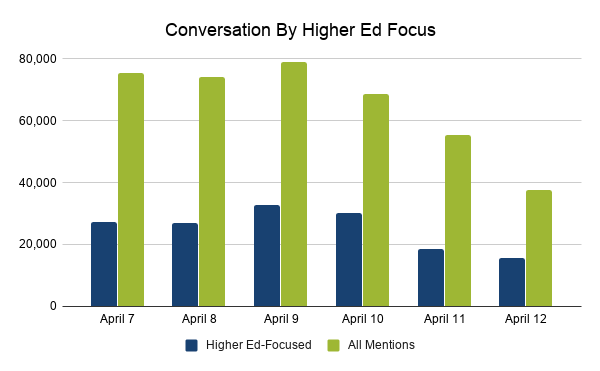 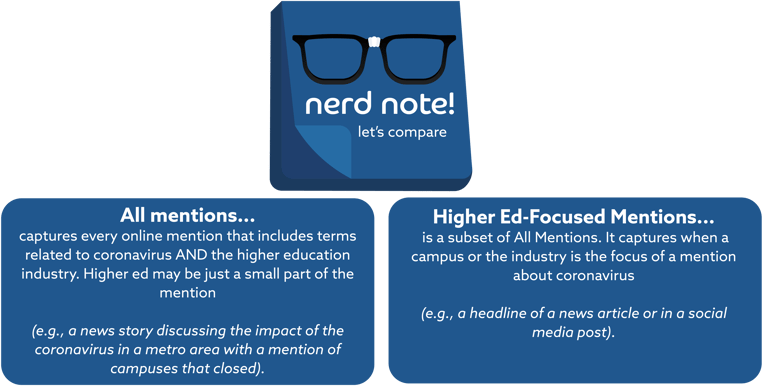 The sources for all mentions and higher ed-focused mentions are similar to our April 7 Briefing. We found significantly more conversation from students on Reddit—59 percent of identified student conversation was on forums.

The following word cloud includes the top 100 people, phrases, and emojis in higher ed-focused conversation April 7–12. Nine of the top 20 topics were associated with negative sentiment (the remaining 11 were neutral).

There’s significant overlap between the phrases “college students,” “foreign nationals,” and Charlie Kirk, the chairman of Students for Trump (an organization owned by Turning Point Action). The phrases all appear in an April 9 tweet from Kirk’s co-chair suggesting all visas should be suspended until the pandemic is over so graduating college students get preference for jobs, rather than foreign nationals. The tweet has over 10,000 retweets and 27,000 likes.

“Coronavirus pandemic” was most often mentioned alongside New York, public health, healthcare, Liberty University (and other terms related to issuance of arrest warrants from university police for The New York Times and ProPublica reporters), the NCAA, and avatar robots. Yes, robots. Business BreakThrough (BBT) University, an online Japanese institution, held an in-person graduation ceremony on March 28 with a twist. Students attended virtually, as their faces were live streamed atop robots dressed in caps and gowns receiving their diplomas. ABC News shared video of the ceremony on April 9. Before you start trying to adapt this tactic for your campus, note that BBT University had just four robot graduates attend their ceremony.

“Remote learning” is mostly used by educators, edtech, and journalists. The phrase appears most often in helpful blog posts from educators, resource and sales pitches from edtech companies, and headlines of news articles focused on K12 remote learning. It does not appear often in student conversation.

“Zoom University,” a tongue-in-cheek nickname for coursework largely delivered through Zoom, appears in the top 20 topics because of a popular meme that also includes the phrase “stressing bc” (stressing because). The tweet captures the sentiment many others apparently share (as evidenced by 11,000+ retweets and nearly 44,000 likes)—an endless loop of avoiding work, stressing out, talking oneself out of not being stressed, then not doing coursework as stress levels decrease, starting the loop over. More than a meme that makes one say, “me, too”—it’s a recognition that students need more than time management; they need stress management and mental health resources, and likely a lowering of expectations to continue with online courses during a pandemic lockdown.

“College football” was the eleventh most mentioned phrase in higher ed-focused conversation, appearing in both individuals’ social media conversations (many referencing Oklahoma State coach Gundy) and news coverage. Headlines included “Amid uncertainty, college football trying to plan for season,” “UCLA coach Chip Kelly isn’t a fan of holding football games in empty stadiums,” and “Fate of 2020 college football season still unknown.” It seems the potential cancellation of the college football season would be another major turning point in pandemic fallout for many fans (and of course, campuses and the NCAA). A joke also fueled the popularity of that topic.

The name “Brian” in the topic cloud came from a personal tweet that’s mentioned in the audience insights portion of this Briefing.

While higher ed-focused sentiment is slightly less negative (down to 28 percent compared to 30 percent in our last Briefing), negative sentiment from campus constituents sharing their experience in the first person increased by 27 percentage points to 62 percent. 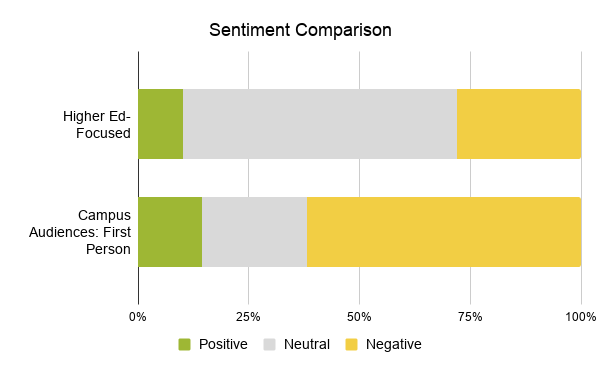 This tells me that students and their families are not okay. Their negative sentiment isn’t always directed at campuses; it can be an expression of mental health issues, frustrations with family members or employment challenges, or missed opportunities this spring. Some campus constituents are grieving the death of friends and family from the virus. But yes, some of it is directed at online courses and campus administration.

When the conversation is this large it’s hard to find the individual voices. While almost 119,000 individual accounts are contributing to higher ed-focused conversation, only 5.5 percent of the mentions are first-person accounts from individuals who reveal an affiliation with a campus. These hidden voices represent lived experiences that provide valuable insight as you craft your communication and service delivery. 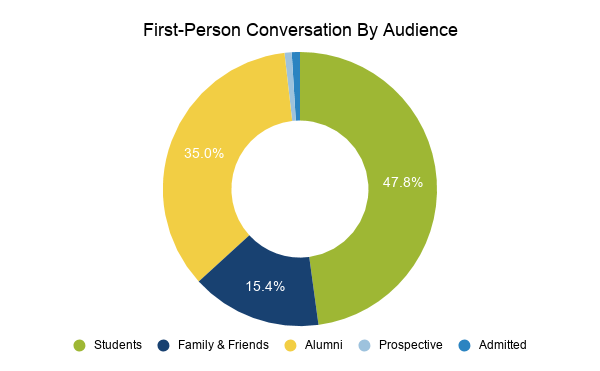 Regular readers of the Briefing will notice we identified much more alumni conversation this week than in prior Briefings. This is largely due to a tweet from someone mourning his college friend who died from COVID-19. It was retweeted often.

Students are talking about a variety of topics, mostly on Reddit, where the top five words in posts are school, time, work, people, and feel.

Changes to Internships Cause Student Stress

Many summer internships have been cancelled (the popular Disney internship program is suspended), and some spring internships ended abruptly. Students wonder what they can realistically consider for fall internship opportunities. They’ve been told for years that internship experience is critical for future career prospects—some are enrolled in programs that require internships for graduation. But what if those internships no longer exist?

A computer science sophomore asked members of r/cscareer, a subreddit dedicated to career advice for computer science professionals, if she should attend a software engineering bootcamp that guarantees an internship, since her summer internship was cancelled. Think on this: a current computer science student is considering a bootcamp because of “her fear of not finding an internship.” I wonder if her program has communicated anything about this to her, or if her fear comes from speculation about the future.

Resources are emerging to help students and campuses navigate the abrupt change to internship plans.

Provide your students with accessible, frank information about internship opportunities. If opportunities have dried up, consider how to be flexible with program requirements or help students find remote opportunities. Do you have resources available that address job hunting during a recession? These can also be valuable; 20-year-olds have never had to consider job searching in a down economy. Help them set realistic expectations and develop long-term thinking.

Speculation About Status of Fall Semester

Yes, students are talking about fall already. This is an emerging topic we’ll monitor closely with the intent of examining it more in next week’s briefing. A cursory look at our data indicates that up to 7 percent of mentions April 7–12 were related to plans for fall. These include:

You likely don’t know how your campus will operate this fall, but don’t let an absence of a decision stop you from communicating with current, admitted, and prospective students. Communicate clearly, and communicate often. Prepare your spokespeople (including admissions counselors and social media managers) with vetted talking points. A non-response to the question “will campus be open this fall?” prompts the questioner to fill in the blanks with their own what-ifs. This could include choosing not to register for fall courses to hedge their bets, especially if they have the option of full-time employment. Above all they need confidence that they can trust their institution to provide a valuable experience and that they’ll make consistent progress toward a degree. Silence doesn’t breed trust.

Conversation volume decreased sharply compared to last week. Although the source of most mentions was consistent with last week, a large portion of student conversation (59 percent) was on forums—mostly Reddit. Top topics were mentioned with negative or neutral sentiment, and included politics, public health, healthcare, athletics, remote learning, and a meme about Zoom University. While less than a third of higher ed-focused conversation had negative sentiment, almost two-thirds of first-person conversation from campus audiences was negative (although that wasn’t always directed at campuses). Students are sharing their frustrations and stress from cancelled internships and speculating on what they can expect in the fall.

The Coronavirus Higher Education Industry Briefing is Campus Sonar’s first real-time industry research project. If you find it valuable, please let us know (tweet us at @CampusSonar, email info@campussonar.com, or comment on this post). Do you have additional questions about the conversation you’d like us to consider for a future briefing? Let us know.

We’ll be back on Tuesday, April 21 with our next briefing. Until then, you can catch up on prior Briefings or learn more about how Campus Sonar can help you make the most of every engagement opportunity during the most unpredictable yield and summer melt cycle yet.