When you create any piece of content, a critical component is understanding your audience. Who will read your content? What are the demographics of the channel you’re publishing on? These are important questions to make sure your content resonates.

In general, note that almost half of teens report that they’re online almost constantly. These are the teens you want to enroll and retain, and digital engagement is your most important strategy for engaging them. The key takeaways from the 2019 RNL E-Expectations Trend Report are in line with the usage and demographics that we found in researching this post.

This post shares 2020 demographics for the most popular social media platforms to help you easily find them in one place. 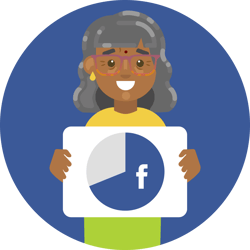 We’re going to start with Facebook, still one of the most widely used platforms. It feels like an old friend with 69 percent of adults reporting that they use the platform. It’s popular with all demographic groups and among adults who use it, 74 percent visit the site at least once a day.

Of 18- to 49-year-old adults, 79 percent use Facebook. Eighty-eight percent of users are on the platform to stay in contact with friends, family, groups, and organizations. 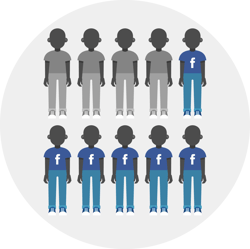 For higher education, these use patterns make Facebook a prime channel for parent and alumni engagement. Depending on your needs, you can also use it with prospective students who are on the platform once they commit to your institution, making it a great channel to reach out to them as they become more active once they’re on campus or invited to admitted student Facebook groups.

A caveat with Facebook is that it’s the one platform users refer to when they consider taking a break from social media—4 in 10 users have taken a break for several weeks. A quarter of users deleted the app from their phone at some point in the past year and 54 percent of users adjusted their privacy settings.

Instagram—The One You Look Up To

For teens and young adults, Instagram is one of the big three (along with Snapchat and YouTube). It’s also the second most frequently logged into platform after Facebook. It’s the platform for when you want to show your best self, where you see people and ideals you aspire to be like. According to the urban dictionary, something is Insta worthy or gram worthy when it’s good enough to post on Instagram.

The breakdown of platform use is:

Instagram’s use is up almost 10 percent from 2016 and use doubled between June 2016 and 2018. Every day, there are over 500 million stories posted and 3.5 billion likes. It’s the most popular network for 32 percent of teens and 63 percent of users are on the platform every day, spending an average of 53 minutes perusing their feed and stories.

Instagram Stories launched in 2016, allowing users two ways to share content—via their feed or stories. When you think about content strategy for Instagram, consider that these formats are likely to be seen by different people.

If you use influencers in your marketing strategy or are considering using them, you’ll most likely use Instagram. Eighty-nine percent of marketers use Instagram as the most important social channel for influencer marketing. Higher education has the highest engagement rate of any industry at 3.96 percent. Your current and prospective students are on Instagram, interacting with your campus accounts. In fact, 67 percent of high school students find photos the most interesting social content and 45 percent enjoy seeing student social media takeovers. 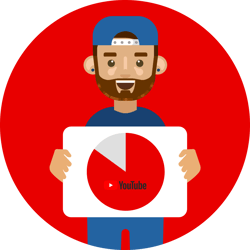 When you think of YouTube, you probably think of videos. But this misunderstood platform is actually a social media network that’s used by 85 percent of U.S. teens—your specific audience. When you think about high schoolers, your prospective students, 69 percent of seniors and 72 percent of juniors use the platform. They use it for lots of reasons, but the use that’s relevant for higher education is researching college—44 percent of high school seniors and 37 percent of juniors say it’s the best app to use. But the research isn’t to discover colleges, it's research for authentic content to determine if a school is right for them.

Teens use YouTube’s video comments as the social aspect. Students watch your school’s branded YouTube accounts, but they don’t comment on them because they don’t expect authenticity. They do, however, comment on videos from personal student accounts. When you create your YouTube strategy, pick your influencers or vloggers and let them post the content natively on their personal account. Then syndicate that content to your branded account. That's the authenticity that students look for and expect.

YouTube is also the most widely used platform with 73 percent of U.S. adults reporting that they use or follow the platform. 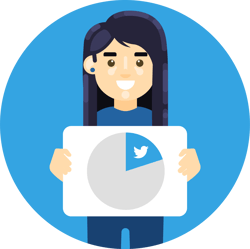 So who are Twitter users? They’re reliable and always there to share their opinions. Twenty-two percent of adults use Twitter and 44 percent of 18- to 24-year-olds use the platform. Of all groups, Gen Z is most likely to use Twitter, but they also divide their social use among other platforms so grabbing their attention isn’t always easy.

Twitter users generally tend to be younger, more highly educated, and have higher incomes than U.S. adults overall. The unique aspect of Twitter is that 80 percent of the Tweets come from 10 percent of users. These active Twitter users have 20 times as many followers, on average, and they follow 6 times as many accounts.  With Twitter, it's important to pay attention to impressions as well as hearts, replies, and retweets, since the data suggests a majority of people use Twitter to consume information rather than interact or engage with it.

Users spend an average of 3.39 minutes per session and the average tweet has a lifespan of 15 to 20 minutes. People use Twitter for quick updates and latest news; a key to your Twitter strategy is knowing when to post to best reach your audience.

TikTok is the newbie platform and use is on the rise. The mobile-based social media platform was the second most downloaded app in 2019. Teens are here, using this platform—40–45 percent of users are under the age of 20. The platform hosts user-created short videos, with video content that varies from trending dances and practical jokes to short skits and miscellaneous clips. TikTok is all about the "for you" feed—anyone can hit the page and go viral, even if they don't have any followers.

TikTok has 800 million monthly active users and over one billion videos are viewed globally every single day. Users average 52 minutes per day and open the app an average 8 times per day. The app fuels viral videos and encourages users to return through artificial intelligence and machine learning. It tracks the videos users watch and like to provide endless content on demand to share on the “for you” page. The effectiveness of this feature is clear; if a user clicks the like button on as few as three videos with dogs, for example, they’re sure to see a steady increase in dog videos instantly appear in their feed.

Other considerations are that 66 percent of the app’s users are younger than 30 and users skew more male than female, which is not the case with Facebook and Instagram, which have more female users. The popularity of TikTok comes from video downloads users can freely share to other social platforms. Viral challenges are also very popular because they compel others to participate.

Snapchat reaches 90 percent of all 13- to 24-year-olds and 75 percent of 13 to 34-year-olds in the U.S. The platform offers the element of instant gratification its Gen Z and millennial users are looking for. Almost eight in ten users ages 18 to 29 say they visit the app every day. And for many users, a snap replaces a text message. It’s become the constant companion for teens, the standard form of communication, allowing users to send inconsequential photos and images with their messages.

The key to Snapchat content is that it’s authentic and can’t be found on other platforms. Snapchat has 210 million daily users and is the most important network for 41 percent of teens. Roughly eight-in-ten Snapchat users ages 18 to 29 (77 percent) say they use the app every day, including 68 percent who say they do so multiple times a day.

These users are your prospective and admitted students. Develop a Snapchat content strategy that engages your audience on Snapchat and use it as a recruitment and student engagement tool. 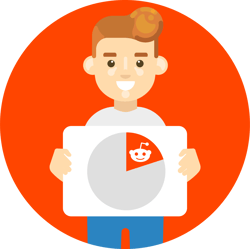 If you’ve followed us for awhile, you know that some Sonarians are a little obsessed with Reddit. And it’s for good reason. Reddit is an open community and discussion forum used by 22 percent of adults ages 18–29. This may not seem like a large number in comparison to the other platforms we’ve talked about, but Reddit’s largest growth is in the under 29 demographic. The r/ApplyingToCollege subreddit has 163K+ subscribers and almost 400 posts per day with 1,500 comments per day. These numbers are up from less than 10K subscribers in January 2017. This is where your prospective and admitted students spend time finding the answers to their questions.

Reddit currently has 330 million monthly active users, the same amount as Twitter, and it’s become the sixth most trafficked website in the U.S. Users like that the platform is completely anonymous and it’s not subject to the algorithms of other social media platforms. Conversations are organized by topic via “Subreddits” and subreddits are controlled by volunteer moderators

Our opinion on Reddit changed when we found a post in a city's subreddit from a student at a local campus who was struggling with depression and was looking for advice regarding the campus counseling center. They needed help. They went to Reddit. It’s become a confidant, a place where people go to anonymously ask questions they can’t ask anywhere else. This sparked a lot of questions for us. And it's what prompted our research into the online conversation of college admissions. Our first takeaway is that the process is incredibly emotional.

Reddit is a trusted place where students can go with their fears. And they may even have specific questions about your university, or need to vent. There's a lot of this on Reddit. But it’s not all fear and sadness. Once students are accepted, they show love and joy; they thank the community and start to give back to prospective students who are now in the “I'm scared” place.

There’s a lot to unpack with social media and students are often more savvy and knowledgeable than we are. But we know what they like—they tell us through surveys like RNL’s e-expectations and online through our social listening—we just need to give them the information they’re looking for. That’s when they engage and commit.

You can read more about social media demographics and any updates we have in our new book out later this spring—an update of Liz Gross’ How to Manage Social Media in Higher Education.

We're using our social listening expertise to provide Industry Briefings that dig into the conversation we're seeing about coronavirus and higher ed and slide decks of key insights you can share with your campus team and constituents. You can get these resources here, no email required.