The Medium Is the Message

If I asked you to define authenticity, could you do it? When I tried this myself a few weeks back, I ended up settling on a definition that was something like, “content that is authentic.” Realizing that the word authentic is also subjective, I tried defining that, only to rely on the word original. But what is original? With each attempted definition, I found myself going deeper and deeper down a rabbit hole until eventually my wife jolted me back to reality and commented that I’d been holding the same piece of chicken on my fork for an unnatural amount of time. Note to self: save the work thoughts for a place other than the dinner table.

But my question remains: how do you define authentic content? You probably face a similar challenge in answering the question. Because authenticity is inherently subjective. 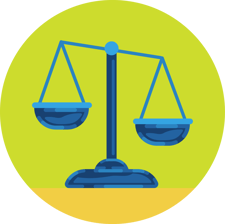 In that way, authentic content is like another, less safe-for-work type of content. Back in the 1960s, a racy (for its time) film called “The Lovers” was released. A small theater in Ohio wanted to show the film, but the state of Ohio prohibited it, claiming the film’s content was too obscene for the general public. The theater sued the state, claiming the decision infringed upon its first amendment rights. The case went all the way to the U.S. Supreme Court, where Justice Potter Stewart wrote of the film’s content:

“I shall not today attempt further to define the kinds of material I understand to be embraced within that shorthand description [‘hard-core pornography’], and perhaps I could never succeed in intelligibly doing so. But I know it when I see it, and the motion picture involved in this case is not that.”

What does this court case have to do with authenticity? Like the explicit content Justice Stewart wrote about, authenticity is terribly difficult to define. But while you may not be able to define it, you know it when you see it.

So do your incoming students.

Our first clue comes in the form of view counts. Students may turn to YouTube to research your institution, but they aren’t making decisions based on recordings of your on-campus events or five-minute talking head videos in front of a green screen.

What they want are student perspectives. “I tend to watch ‘the day in the life of a [school]’ videos,” one high school senior named Matt told me on Reddit. “It gives an honest and unfiltered perspective of the college.”

“I'm going to watch a lot of these videos if I get accepted to decide between colleges,” one international student added.

Many schools know this, of course, and have added a student vlog component to their YouTube channel. West Virginia University—for my money, the best YouTube presence in higher education—has a robust student vlog series. Other schools, like Bowdoin College or Flagler College, prominently feature the student perspective within their respective video libraries.

But while these videos generate views, they’re missing one key engagement metric: comments.

The student vlog at West Virginia racked up nearly 2,000 views, but generated only a single comment. 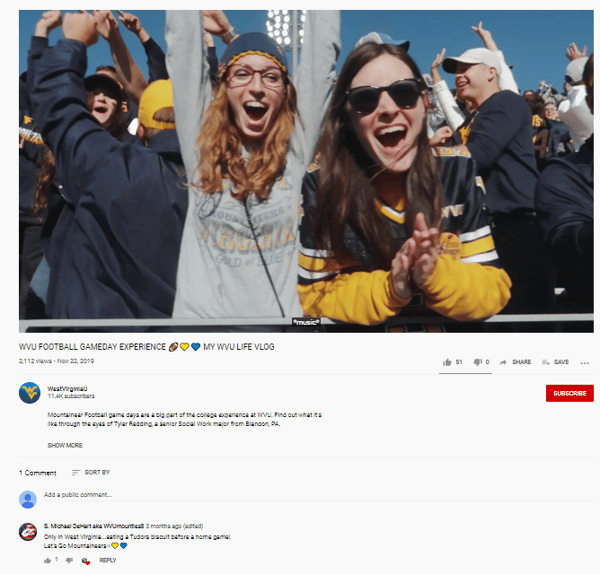 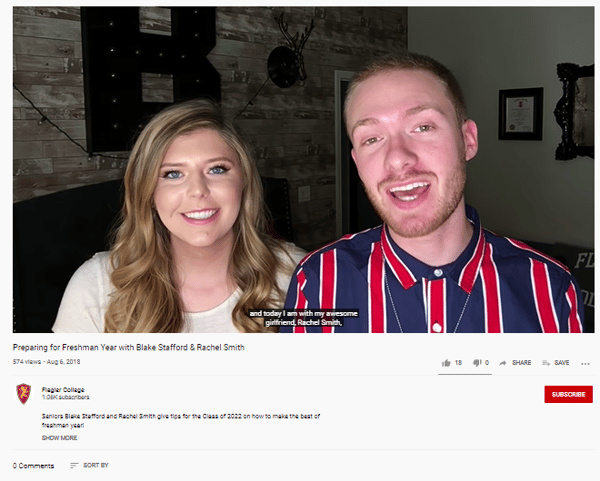 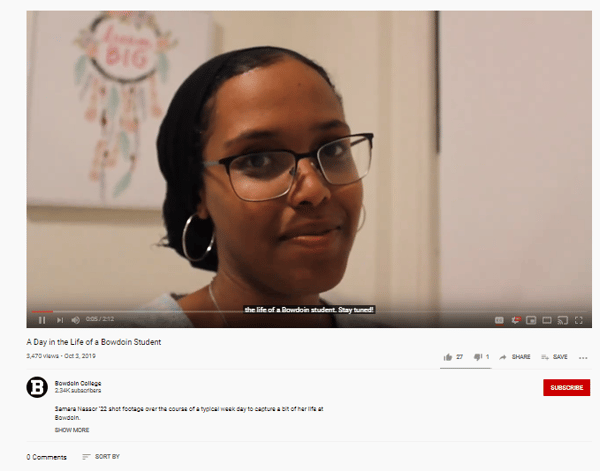 Why not? Because while these videos feature the student perspective, they’re posted on their respective school’s official channel. And that means they’re branded. Students watch, as the view counts prove, but they don’t get that true sense of authenticity, and therefore, don’t actively engage with the content or authors. 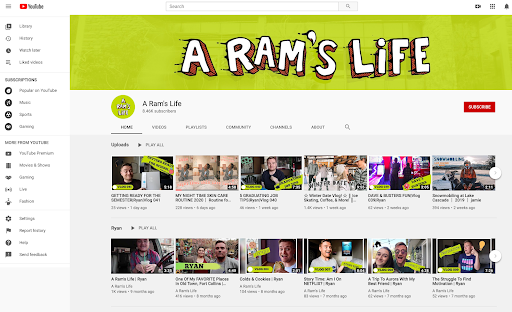 Their student vloggers are also free to post whatever they want. It doesn’t have to be about CSU. One vlogger made headlines when she posted a video documenting her decision to get a tattoo. Others talk about their technology habits, skin care routine, or off-campus adventures.

This account has generated nearly 9,000 subscribers, and most videos earn several hundred views. But they also have something else in common—a lack of comments. Jamie’s rib tattoo video only received a single comment; Grace’s college Q&A received the same. These videos have one degree of separation from Colorado State University, but they still face a perceived lack of authenticity.

“I watch content from both the school's official [YouTube] channel and admitted students, but I feel myself gravitating towards student-made content because it feels more authentic and easy to watch. Most official college videos tend to feel like (and basically are) a long, two-minute advertisement.”

“I prefer videos from the students’ channels because they seem more real and I'm not worried that they were doctored by the school to make it look better,” said another high school senior.

What do these comments mean? Essentially, the medium is the message. When content comes from a branded channel, it’s not perceived as authentic, no matter how hard you try. And that’s something you need to pay attention to, because there are serious benefits to creating authentic content.

To demonstrate, let’s return to Bowdoin College. Bowdoin College is a small, private liberal arts college in Maine that frequently publishes on YouTube. And while they have their fair share of musical performance and live event records, they also boast an impressive library of student stories and admissions videos, which helped them gain 2.3k subscribers. On October 3, 2019, Bowdoin posted and featured a video hosted by Samara Nassor, a member of their class of 2022. You saw this video in the above screenshot. If you’ll remember, this video earned almost 3,400 views but not a single comment.

One day after Bowdoin released their student life video, another student, Owen Marvin, released a very similar video with a focus on a dorm tour. Owen only has 456 subscribers, so expecting his video to earn the same number of views as the Bowdoin College video seems foolish.

Indeed, Owen’s video didn’t get the same number of views as Bowdoin. It got more.

When creating content for a younger audience, social media managers dream of comments. Comments are a type of active engagement, in a way that a simple view or even a like aren’t. Comments take time and effort on behalf of a viewer—making that effort signals they care.

Take a look at the bottom left corner of Owen’s video. That’s right, his video generated a whopping 32 comments. A vast majority of which come from prospective and admitted students and contain information marketing and admissions teams would gladly pay money for in the form of focus groups.

And with each question, Owen is there with an honest answer—he says the dorms smell fine, in case you were wondering.

It should be noted that, unlike my other favorite writing topic, Reddit, many of these names are real names. That means you can log activity in your CRM and send relevant information to students based on their inquiries. Do you have a dedicated email or web page about your dorm rooms? You might want to send that to Teagan. Have a killer faculty profile? You might want to send that to Alex. Don’t feel comfortable using that information to facilitate more relevant 1:1 outreach? Use the information in the comments to adapt your content strategy or comms flow.

If you currently work with student vloggers, don’t rethink your entire strategy. But you might consider having students post their content on their own channel first, and then syndicate that content to your branded page, rather than the other way around. Essentially, that’s the inverted approach to CSU’s A Ram’s Life.

If you have students organically vlogging about their experience, don’t stop them and don’t try to control them. But do feel free to reach out to them and thank them for sharing their student experience, and subscribe to their videos to monitor prospective and admitted student comments. If you feel comfortable, offer optional content suggestions or behind-the-scenes access to a part of your campus, such as a new building still under construction or part of the admissions process. (Just make sure they disclose that access.)

If your first instinct is to feel uncomfortable with handing over that much control of your brand to your students, remember that intentionally or accidentally, you’ve already handed over control to those students. Because they’re already publishing videos that outperform yours.

The medium is the message. And when it comes to authentic content, your prospective and admitted students only get it from your students’ individual accounts. As an administrator, you can bury your head in the sand and hope your students say nice things about you, or you can find those students, treat them well, partner with them, and trust that their authenticity will come with positivity.

The post The Medium Is the Message originally appeared on Campus Sonar's Brain Waves blog.

Steve is Campus Sonar’s Business Development Manager. A natural marketer and relationship builder, Steve has spent more than ten years in higher education, in both campus and agency environments. In the past five years, Steve successfully launched a student-blogging platform, an agency podcast, and a higher education online magazine, all with a mission to bring people together though content. At Campus Sonar, Steve leads the business development efforts for the agency, working with campus professionals to identify appropriate social listening programs that will help meet strategic institutional goals. An amateur runner and professional donut connoisseur, you can often find him on Twitter staunchly defending the Oxford comma.