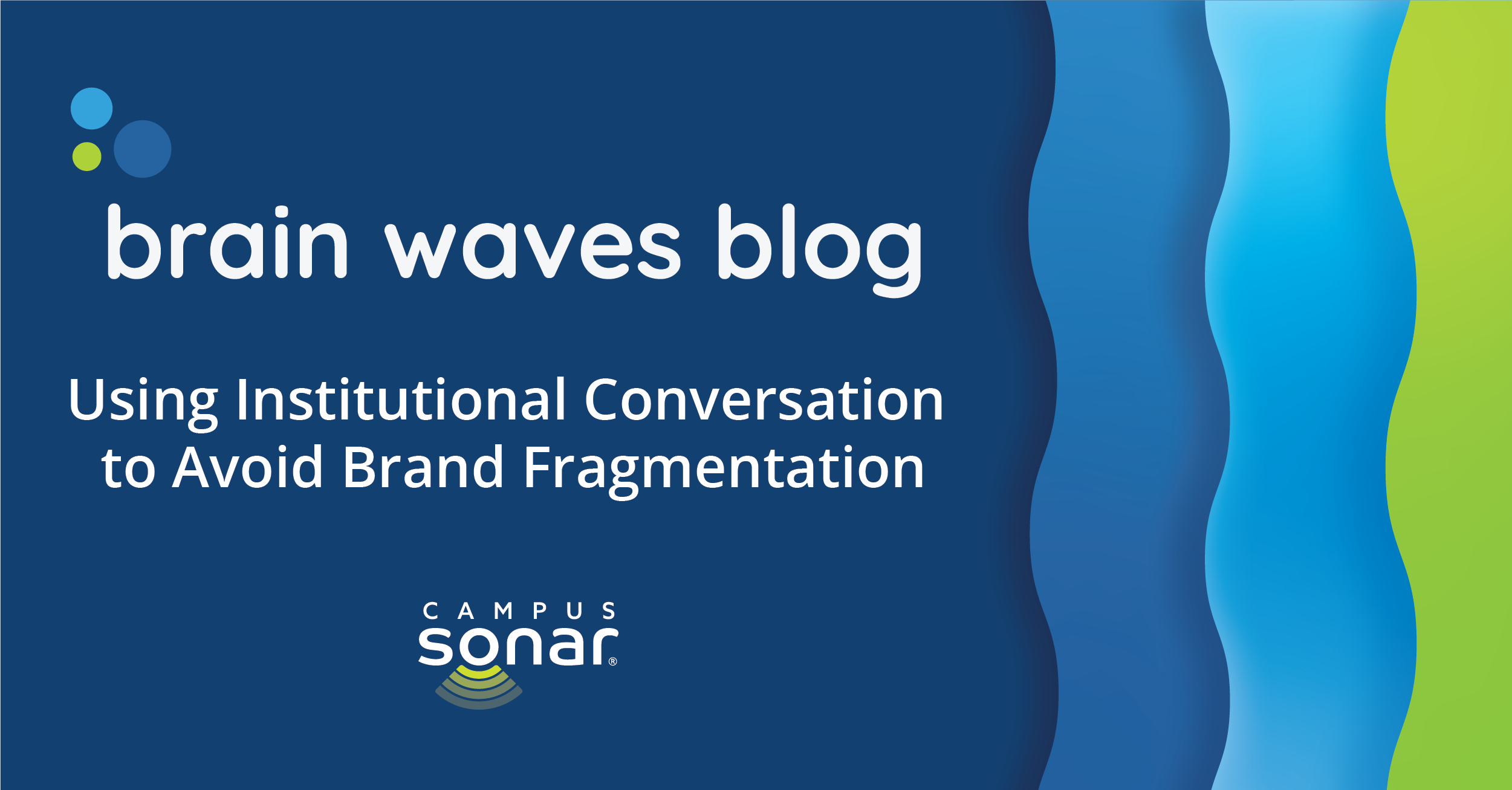 There’s a lot of online conversation taking place about colleges and universities in the United States.

Campus Sonar has been tracking this conversation volume for a few years now, through our individual client work, but also through industry benchmarking research. Data for the first half of 2021 is being rolled out to STREAM members this month, but I can tell you that in the second half of 2020, the median value of conversation volume about a campus was 2,654 mentions, spread out across social media, news, blogs, forums, and review sites.

Not every campus experienced that volume of conversation. Conversation volume tends to rise along with enrollment, among other factors.

In the second half of 2020, the median value of conversation taking place on social media was 74%. For a typical campus, that percentage was anywhere between 61% and 85%. Those figures are similar to the 2018–2019 academic year, though STREAM members will note that there was a noticeable shift in the percentages of conversation by content source in the first half of 2021.

For many marketers, even those who pay close attention to social media, that may seem like a large amount of social conversation. We’re talking several hundred mentions a month for many campuses, and tens of thousands per month for larger campuses.

The problem for most campus marketing leaders is that this volume of conversation doesn’t add significant value on its own. First and foremost, that’s because most marketers don’t actually see all those mentions. But if you or your social media manager are trying to make sense of more than 100,000 online mentions of your campus, I’d wager the primary feeling you’ll experience is being overwhelmed.

Essentially, conversation volume, on its own, is nothing more than noise.

The Value of Categorization

The missing pieces to making sense of online conversation are segmentation and categorization. Campus Sonar approaches this differently for every client, but one of the most consistent and fundamental breakdowns is classifying conversation as owned or earned.

This isn’t to say that campuses don’t create a substantial amount of owned conversation. On the contrary, colleges and universities create an incredible volume of conversation, thanks to the large number of accounts that represent a respective campus. When we last benchmarked the number of social media accounts, that number ranged from 3–17 accounts for very small campuses all the way up to 86–188 accounts for large campuses.

In actuality, those numbers are likely low. For one client with about 9,000 students, we recently found more than 300 accounts. At the University of Michigan, which topped 50,000 enrolled students this year, there are more than 1,200 active official social media properties.

In benchmarking reports, we classify the entirety of those accounts as owned, since nobody can argue those accounts represent the campus brand. In reality, we know the central marketing and communications team doesn’t actually own them; they have little to no control, influence, or even awareness of the conversation coming from every account on campus.

But if a portion of those 188 or 1,200 social accounts aren’t truly owned, they certainly aren’t earned either. Because they absolutely represent the campus brand in name, image, and hopefully voice and tone. So how do we classify them?

It starts with something called, “institutional conversation,” and it's the key to understanding the full scale of social media and the level of brand alignment on your campus. Institutional conversation is content created or shares of content created by social media accounts affiliated with a campus but not centrally managed. Or in more accessible language, conversation published by an account that represents your brand, but isn’t managed by the central marketing and communications office.

When we examine campus conversation with institutional conversation in the mix, the picture of a campus brand, and where that brand is built, changes—slightly for smaller campuses and dramatically for those with larger enrollment.

For the small private campus, you can see that by adding institutional conversation as a category, we learn that 40% of what we used to classify as owned conversation, and 13% of all conversation, is actually created by decentralized groups and departments across campus. That’s a sizable slice of the brand pie. 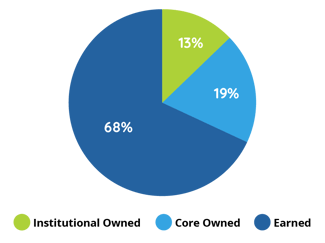 At the large public campus, the difference is more extreme. Here, what originally looked like a substantive 25% of all conversation being owned now becomes a paltry 3%. The remaining 22% is created by institutional accounts. 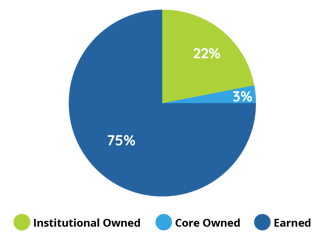 The large private shows what this shift can look like at its most extreme. 96% of the conversation is earned, which doesn’t leave much room for owned conversation to influence the conversation to start with. But among that remaining 4%, only 1% is centrally managed by the marketing and communications department. 1%! 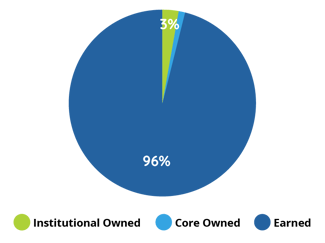 Why Does this Matter?

If you’re a marketing leader on campus, and you operate within a decentralized environment, this should make clear how important it is to work towards cross-campus buy-in for your strategic messaging. Your flagship accounts are likely run by some of the most talented, well staffed, and well funded marketing professionals on campus. Despite all of that, they contribute to a small, and for some, alarmingly small, percentage of total social conversation.

Most central marketing teams limit their reporting to their flagship accounts. In doing so, they ignore the majority of conversation that’s created on behalf of their brand. Only when categorizing your social conversation can you bring a structure to the noise that is tens of thousands of online mentions, capturing the full scale of social media and, more important, where that conversation comes from.

Know that if you have a large percentage of institutional conversation on campus, you’re leaving yourself open to increased levels of brand fragmentation. You might have a cohesive, compelling story to tell on behalf of “the brand,” but that message may be undermined and/or drowned out by conversation from accounts managed within departments, colleges and units, research centers, and other disparate areas of campus telling a very different story in a very different way in hopes of meeting very different goals. Once you define the portion of your conversation that’s institutional, you can understand which areas of campus have the largest share of voice, who’s staying on brand, and who may need extra guidance or training.

Institutional accounts are more likely to be managed by individuals without formal training or individuals for which social media is just one of many job responsibilities. You’ll have a few hidden gems on campus, of course, but most would benefit from regular, intentional support to help create the kind of content that represents the unique aspect of campus they represent while fitting into the framework of the umbrella brand guideline. That effort may include campus working groups, brand workshops, or downloadable templates, guides, etc.

This approach to understanding and influencing social conversation won’t happen overnight, and it won’t happen without proper investment. That’s an immense challenge given staff turnover and the fact that 70% of higher ed CMOs are already reporting that they do not have the budget necessary to meet the expectations of institutional leadership. But this approach is worth doing. As Matt McFadden, Vice President for Strategy and Accounts at SimpsonScarborough, recently wrote on the Brain Waves blog, “creating a framework where communicators across the institution understand how their marketing efforts align with the efforts of others helps increase affinity and perception of your campus's brand.”

Social media continues to be the primary driver of online conversation about your campus, and by extension, your brand and reputation. And like the stock of a publicly traded company, your brand is traded on the market on a daily basis. You’ll never be able to entirely control the rise and fall of your reputation—that power lies with your audience—but you can influence a larger proportion of it by understanding and influencing the full scope of conversation that emanates from your campus. Centralizing your marketing and communications efforts is the primary method for making that a reality, but that process takes years to complete and faces significant political and logistical hurdles on many campuses. Until that day, marketing leaders would be well served to measure and track the proportions of conversation that are owned, earned, and institutional.

The playbook is a free resource that looks at the pandemic in the context of multi-year trends in the conversation.