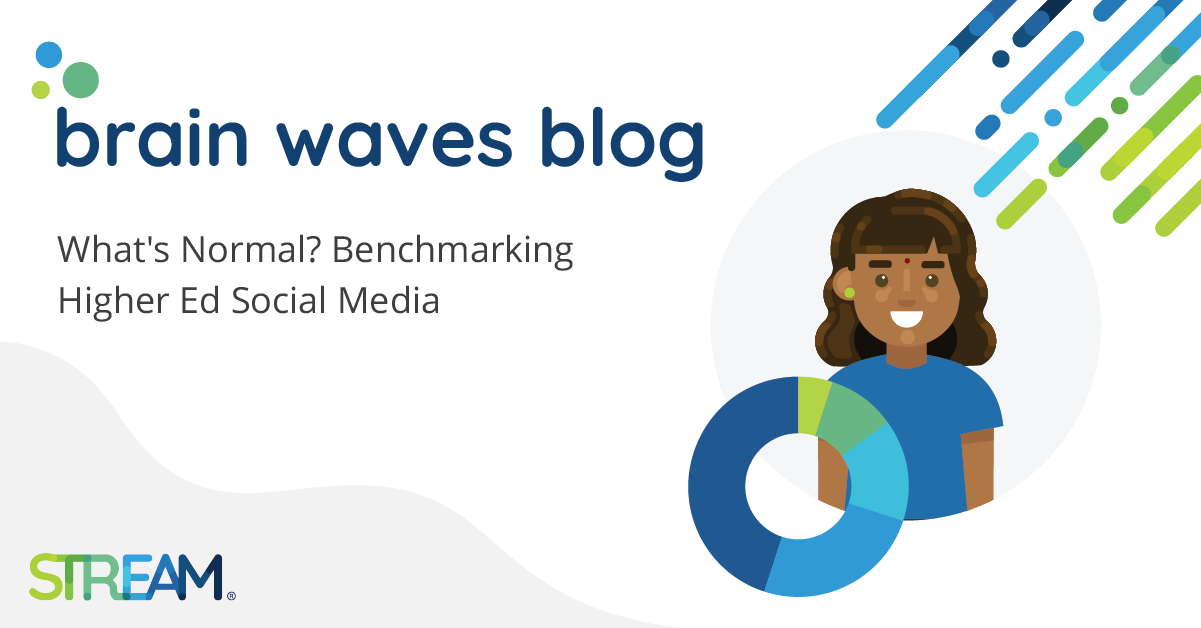 We’re kicking off 2021 with a new way to approach data and analysis in higher education. STREAM is our new membership service that unites social listening research, digestible insights, and a private community of like-minded peers. Members are empowered to make informed, timely decisions based on social listening data and research addressing core areas of higher education like:

Since this is new for us, we wanted to give you a peek inside what you’ll receive as a STREAM member. Our first report is Social Listening Benchmarks for Higher Education: January 2021. It’s intended to support you in analyzing your campus’s online conversation behavior against a comparable sample. The report covers online conversation trends in higher education and institutional benchmarks by enrollment size and type. But we also looked at where these conversations were happening—what were the sources of the conversations? It’s important to understand where your annual conversation occurs. It informs where to invest your time and effort, and guides your overall content strategy.

Over the next month on the blog we’re going to dive deeper into two content sources (social media and news) to give you an idea of the depth of analysis and insight you’ll find as a STREAM member.

We shared in Social Listening Benchmarks for Higher Education: January 2021 (for members only) that the internet is real life. Social media is how your key audiences and communities share their lives, offering you an opportunity to learn more about who they are, what they care about, and how they feel. And most importantly for you—how they feel about your campus.

In the report, we analyzed six conversation sources. Social media drives the largest amount of online conversation at an average of 73%. This conversation includes mentions from Twitter, Instagram, and YouTube. Twitter is by far the largest data source our social listening software collects, with very few mentions from Instagram and YouTube due to platform and privacy restrictions. Due to the number of users who use both Twitter and other social media sites, findings from Twitter can be considered characteristic of all social media sites.

Conversation Volume: How Many People Are Talking

Takeaway: Knowing these ranges helps you monitor conversations to find where they’re likely to occur online. Once you learn where mentions of your campus occur you can further analyze how audiences differ on each platform and the best way to communicate with different users.

We found that social media mentions were the least negative of the content sources—likely a surprise to campus social media managers who respond to these mentions. When your campus’s negative sentiment seems higher than usual, take a step back for a broader view of your conversation with the goal of quantifying conversation sentiment or gaining additional perspective.

Takeaway: The general positivity of social channels allows you to leverage them and use the content you see as a barometer for how your audience feels. You can expect some negativity, but if there’s a significant and persistent shift toward negative sentiment in social conversation it should serve as a warning, indicating that a crisis could be on the horizon.

Owned vs. Earned Conversation: Who’s Talking about You

Takeaway: It's helpful to see how your owned conversation stacks up against other campuses, but a better benchmark may be understanding how your earned conversation compares, and whether or not your campus generates social media conversation and brand engagement at levels comparable to your peers.

The nature of larger institutions typically means they have more financial and human resources to create and support owned social media accounts.

To further understand your audiences, you can examine their behavior and habits across different types of social media mentions, meaning original posts, shared or retweeted content, and comments or replies. We assessed the breakdown of owned and earned social media mentions by these types. Your conversation is normal if it falls within these ranges.

Large institutions also have a higher proportion of shared and retweeted content compared to institutions with less than 10,000 students.

However, there’s little social listening evidence that campuses with less than 10,000 are driving benefit by posting more original content. The typical range of earned social media content for large institutions is 38% to 49% and the range for smaller institutions is similar, 32% to 49%. This illuminates the potential value of owned comments and replies, not only for all institutions, but for smaller institutions in particular. The typical range for owned comments and replies is 1% to 2%, with little difference by enrollment size.

Takeaway: If you work at a smaller campus (which typically develops original owned content at double the rate of larger campuses), consider putting fewer resources toward the development of owned original content and more toward audience engagement via comments and replies.

Consider These Questions for Your Campus

Want more benchmarks so you can gauge your campus’s online conversation? Our new report, Social Listening Benchmarks for Higher Education: January 2021 gives you just that. And, as a part of our new membership service STREAM, by Campus Sonar, the report is just the beginning.

As a member, you get a year of exclusive primary research (reports), companion blog posts to help you understand key aspects of the report and how to use it, infographics of the top insights from the research, access to webinars featuring expert guests from higher ed, a peer community of fellow members, and office hours to engage with the Campus Sonar team.