It’s a hot July day in Florida when Bella—we won’t use her last name—uploads a 17-minute video to her YouTube page. Bella has uploaded one video per month since July 2018, but this video, a year later, is her first video since February. It’s a point she doesn’t hide from her 171 subscribers.

“Hey guys, it’s Bella, back with another video,” she opens. “It’s been a freakin’ long time. I know that.” In this video, Bella has pros and cons that she’s ready to share from her freshman year at college. For 17 largely unedited minutes, she shares details about parking on campus, dining hall food, class sizes, campus community, local attractions and hot spots, and more.

“i knew that [college] definitely wasn't a party school, but are there no parties at all????” asks a prospective student. 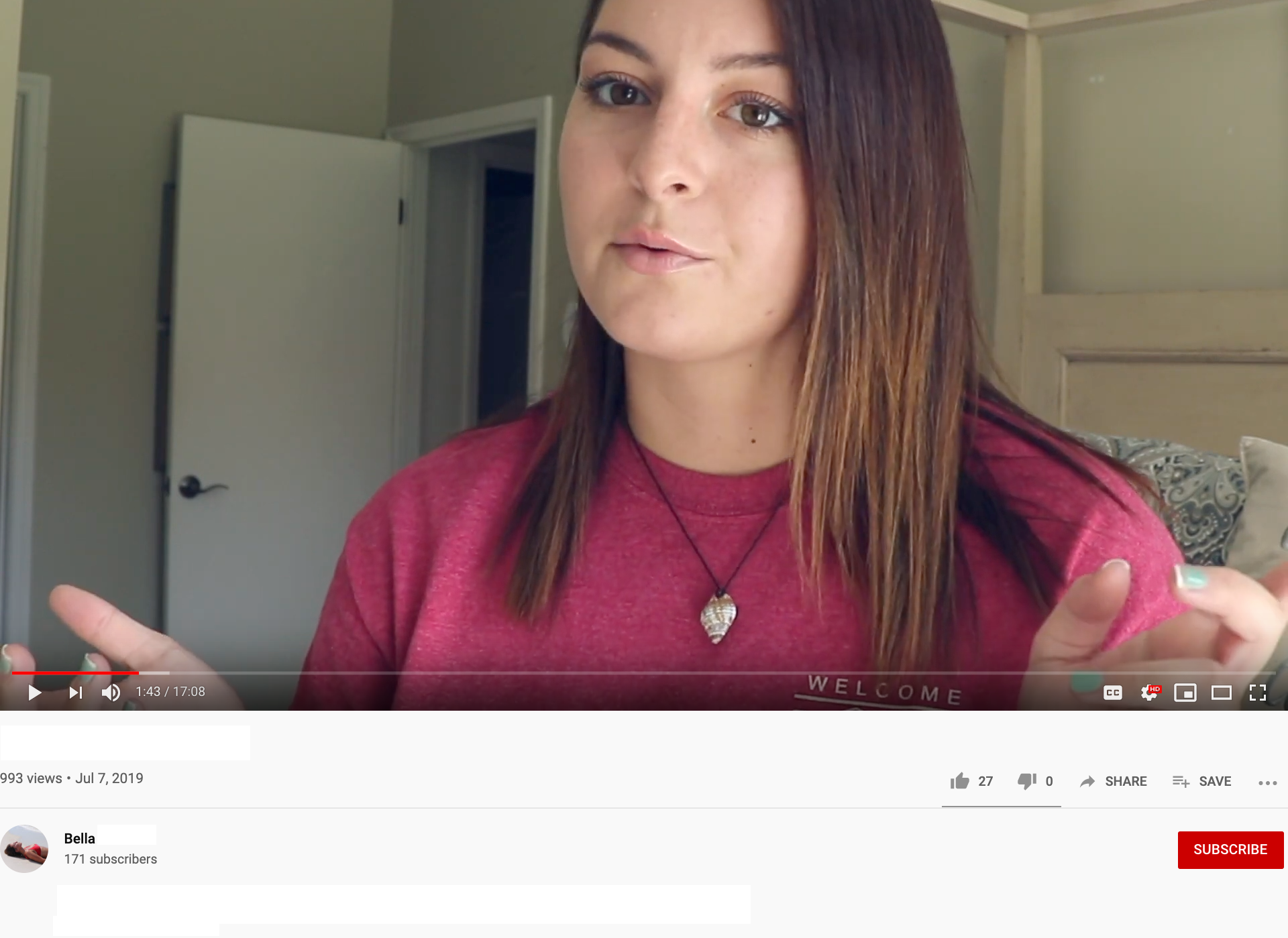 Over the next few weeks and months, a handful of comments appear, each from a prospective or admitted student. One prospect wants to know if the dorm rooms are stuffy year-round; they were when she visited campus over the summer. Another asks for tips about socializing on campus. She’ll arrive at the school in the fall and is shy. Another was contacted by the school as a basketball recruit and wants to know what Bella thinks about the athletics facilities.

Two months earlier, and 1,000 miles north in New York City, another college student uploads a video to YouTube. Christina—again, no last name—typically posts a video every Wednesday and Friday. Her cadence, well beyond what Bella is producing, supports a skincare line she promotes to her 676,000 YouTube subscribers. 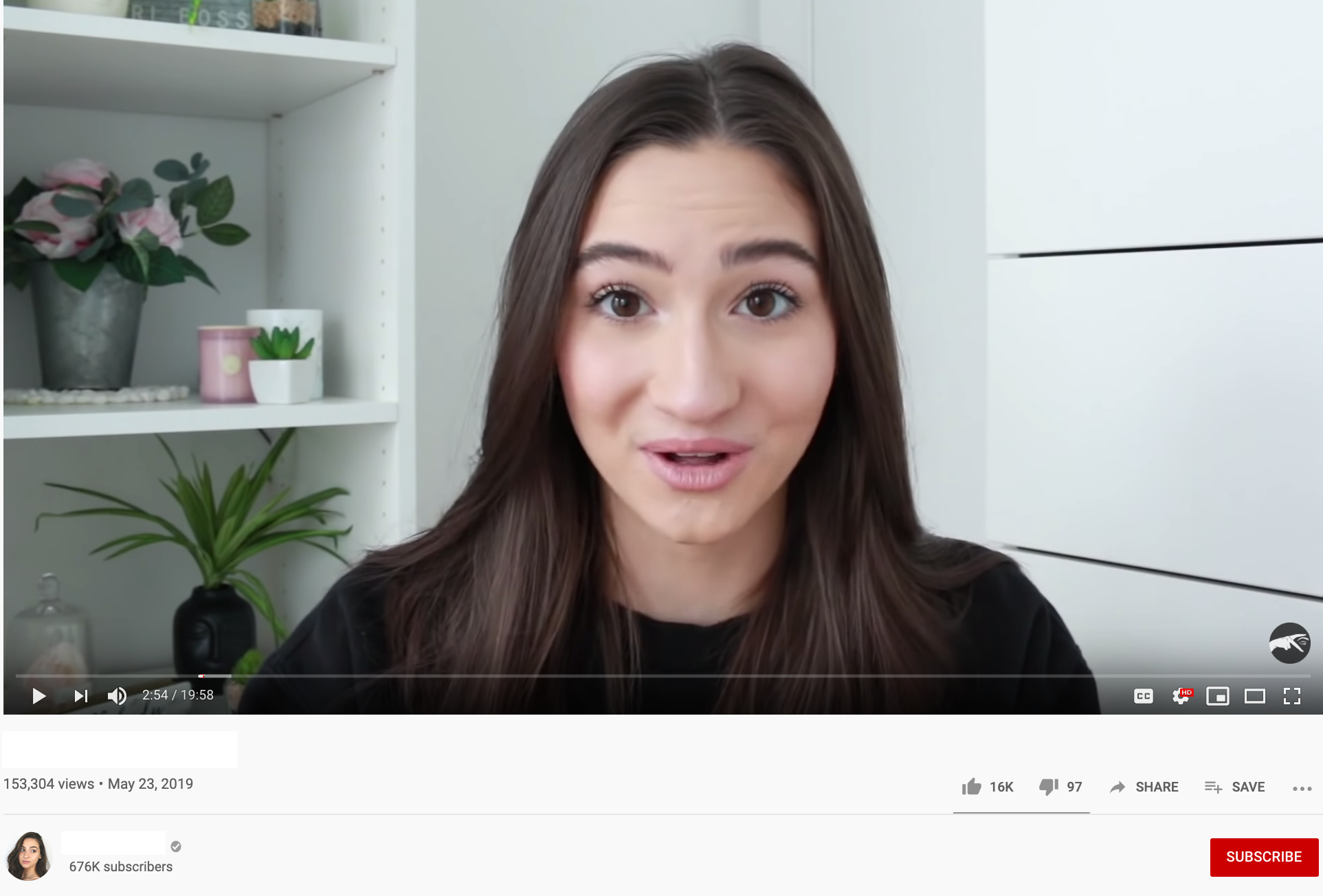 But while most of Christina’s posts are light-hearted and heavily edited, this one has a different tone. She’s opening up about her mental health, and her struggle during the spring semester of her sophomore year. Almost instantly, supportive comments flood her channel. (More than 1,900 are posted by the time I’m writing this article.)

“Omg i have got almost the same when its schooltime,” says one commenter.

“From a fellow 20 year old college student who is struggling, it's okay, we can get through this,” says another. 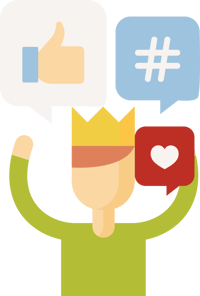 This article isn’t about influencers. At least not directly. We’ve covered that topic on this blog and on our website, and will most certainly do so again.

I’ve come to call this idea the iceberg effect. Why? Well, as you probably know from sixth-grade science class, 90 percent of an iceberg’s volume is beneath the surface. You only see a fraction of its mass above the water.

Similarly, and specifically on social media platforms like YouTube and forums like Reddit, I’m finding that some of the most valuable insights into prospective, admitted, and current students’ challenges and questions about your institution take place below the surface. Software alone only captures a fraction of the conversation.

Going Below the Surface

Let’s return to Bella’s video. Bella mentions her school in the title of her video, meaning social listening software should pick up the mention. But many of the responses don’t mention the school; like the prospective student curious about the dorm rooms.

“When I went on the tour, the dorms were really hot and stuffy. Was it like that year round?”

Or another prospect, who heard rumors about the dining hall. “I heard d hall food is bad what’s your opinion on it? I looked at the menu and it didn’t sound so bad but 🤷.”

These comments are clearly about the school Bella mentions in her video, but neither explicitly mentions the school, meaning social listening software won’t capture the conversations. And because these comments were posted weeks after the original video was published, it’s unlikely that an administrator was still monitoring this page.

But her 676,000 subscribers know where she goes to school. How? Because two previous videos, posted in 2017, mention the school explicitly in the title, first by its acronym only, and later by the official name. But software won’t show you this video. Because software doesn’t know that Christina attends your school. Those 2017 videos are below the surface for software that only pulls mentions after you purchased it.

This isn’t just a YouTube thing. On Reddit—come on, you knew we were going to talk about Reddit, right?—much of the conversation about your school doesn’t actually mention your school. Often, this occurs for institutions with an active dedicated subreddit. Why? Because every conversation on the subreddit is about the institution; there’s no reason to mention it explicitly by name. But again, software doesn’t know that. The posts and comments are below the surface, but still important and worthy of your attention.

The subreddit for a selective midwest university, for example, a student questions whether they need to transfer because of the Socratic method used in freshman seminars. “I don’t know what to do. Please help” the post is titled. Other posts ask for recommendations about cheap food for low-income students, guidance for what happens when students fail or drop a class, or advice on venturing into the nearby neighborhoods. None of the posts mention the school by name. 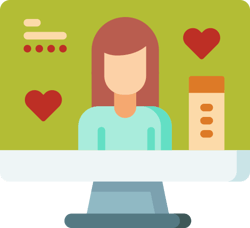 One post is a megathread for incoming students. Posted by the auto moderator in April, it generated nearly 500 comments by the end of October. The vast majority don’t include the school’s name and others only mention the school by its nickname.

But do these missed mentions really matter? After all, while some posts generate dozens, if not hundreds of comments, others generate only a few, and the majority, especially the questions, are responded to or answered organically by a member of your community.

Let’s put aside the quantity question for a moment and focus on the engagement aspect of this conversation. We talk about trust quite a bit at Campus Sonar, and how research continues to show that a peer, or “someone who looks like me,” is a more trustworthy source of information than a company or campus spokesperson or an academic expert.

That may increase the likelihood that an answer is trustworthy, but it doesn’t guarantee that the answer is accurate or encouraging. If current students routinely mention that they don’t feel safe at night on campus, or that the faculty and administration don’t embody the values promoted by the university, that’s a problem you need to be aware of. After all, you can’t change what you don’t know. And while you could get this same information through periodic surveys, those responses are collected sporadically, while online conversation takes place at all times and is more authentic. Even if that answer is encouraging and accurate, there’s value in knowing that your students, alumni, faculty, or staff continuously advocate for your institution and that your campus reputation is in good standing.

But what about conversation volume? Every comment, at its core, is a sample size of one. There’s always risk in reacting too strongly to a single opinion that may not be representative of your audience. This is often the argument used to devalue social listening entirely. While we’re talking about individual comments, every comment is analyzed on its own as well as collectively. The student concerned about the Socratic teaching method? It would be easy to say that’s the reality for a single student. But a deeper dive into student conversation reveals that mental health, while discussed in various ways, is a recurring topic of conversation among the student body.

In other cases, individual comments may elicit a “duh” reaction. Like the question on YouTube about the stuffiness of the dorm rooms. You likely know that residence halls are among the top areas that students are curious about. You may already have blog posts on the topic, or YouTube tours and Pinterest boards with dorm essentials in your content repertoire. In these cases, the value of social listening isn’t the discovery of new topics of concern or curiosity; it’s about adding color and context to topics you’re already aware of. This respective comment may help you craft talking points to student tour guides, or provide them with an answer should they receive this question in the future. Or it may inspire you to create new content about living in Florida during warmer months.

Regardless of the substance in these conversations, going below the surface and unearthing previously hidden conversations helps you understand your audience at a deeper level. It helps you understand not just what they talk about, but how they talk about it—their tone of voice, the specific examples they reference, and the words and phrases they use. 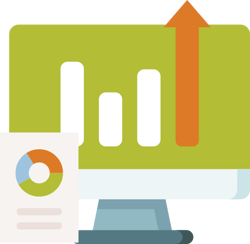 So how do we find these conversations? Much like marketing in general, there is an art and science to social listening. And when we rely on science only, these are the conversations and the value that we lose. That’s where the artist becomes so important. At Campus Sonar, we give our artists job titles like data analyst and strategist. Their job is to find posts from students like Bella and Christina and not only figure out how they fit into your digital ecosystem, but make sure you never miss another relevant conversation from them. They dive below the surface conversation when software only knows to bob at the surface. But critically, they teach the software how and when to venture below the surface moving forward.

The vast majority of marketers, enrollment professionals, alumni relations teams, and student services staff know enough about their respective audiences to adequately do their job. But doing your job should be the baseline, not the target. Finding conversations below the surface is what differentiates the ordinary from the extraordinary. Software can help you reach the baseline, but it takes an artist to excel at online conversation research.

Your institution may have the resources for both software and a human—or even a team of humans. But if that’s not you—if you’re only able to budget for a tool or service and can’t add human resources to the equation, consider your options carefully. An ill-advised investment in software alone with a “set it and forget it” mentality could give you the false sense of security that you’re finding everything. If you can only make one investment, consider Campus Sonar.