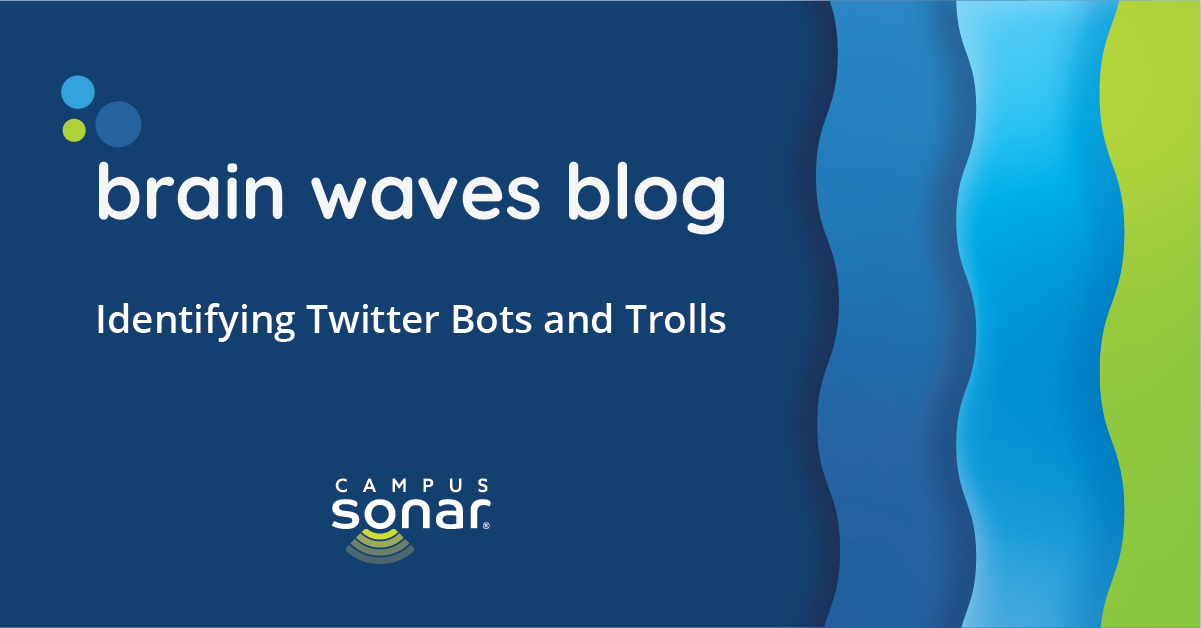 Lions and bots and trolls—oh my! Online conversations provide organizations with honest thoughts and feelings from their audiences, but are all of those mentions actual people? Bots and trolls aren’t just for science fiction and fairy tales anymore.

Bots and trolls are similar, but there are some key differences between the two. Knowing what they are and what they look like can reduce the negative impacts they might have on your campus’s online conversation and your overall brand perception. Let’s look at what they are and how to identify each.

People who use bots for good (humor, activism, etc.) usually indicate they’re bots in their bio text and adhere to rules to avoid upsetting real humans and avoid being banned by Twitter. Twitter has started to test a new feature to label “good” bots on their profiles and in each post.

Many consider trolls just to be highly inflammatory accounts that actively work to anger and frustrate others. While it’s true of some trolls, not all trolls operate that way.

The most cunning trolls work to slowly gain support from individuals from all over the ideological spectrum and push them further into their already solidified beliefs. In this way, they don’t start fights—they slowly maintain polarization online. They may look friendly, but their purpose is to insert themselves into a community and gain a following to influence later. Similar to bots, trolls can actively spread disinformation online and frustrate audiences.

Impact of Bots and Trolls

In 2020, researchers from Carnegie Mellon University captured and reviewed 200 million tweets about COVID-19 (stay-at-home orders, reopening the US, etc.). Here’s what they found.

The high number of fake accounts that exist online can have a direct effect on how higher ed marketers accurately understand online conversation about their campus and their brand’s perception.

Bots and trolls have the potential to:

So what are some potential red flags that can help you detect bots and trolls?

Although these red flags may aid in detecting trolls and bots, they’re not a surefire way to get them every time. Some accounts might seem fake due to their behavior, bio information, or profile picture, but people use social media for many reasons and the “correct” way to use social media looks different for everyone. Not every angry comment or grammatically incorrect mention is from a bot or a troll.

You might find yourself in a situation where you have to respond publicly to a troll account.

In 2020, an incoming Clemson University student posted racist and offensive content online. The public shared their frustration over the account and many demanded that the institution take action against the student. Clemson officials shared a statement explaining that there was never a student with that name registered at the institution and cited the post as the work of trolls.

Not every troll requires a public statement to your audiences. Higher ed communications professionals should aim to properly match a response to the severity of the issue. In some cases, refer to the old expression “don’t feed the trolls.” Trolls who are hoping to disrupt conversations might be best left alone. Giving potential troll accounts attention might be exactly what they’re looking for to continue their troll-y ways.

That being said, trolls who repeatedly antagonize members of your online community or who spread misinformation should be reported and/or blocked. It’s important to watch over your online communities and to stay alert to bad actors who might be intentionally disruptive.

Here are a few other resources to help detect bots and trolls. If they fit your needs, you can use them to gain a better understanding of the bots and trolls that are out there and the impact they have on your campus and brand.

Learn more about social media strategy in our book Fundamentals of Social Media Strategy and the training series based off the book.