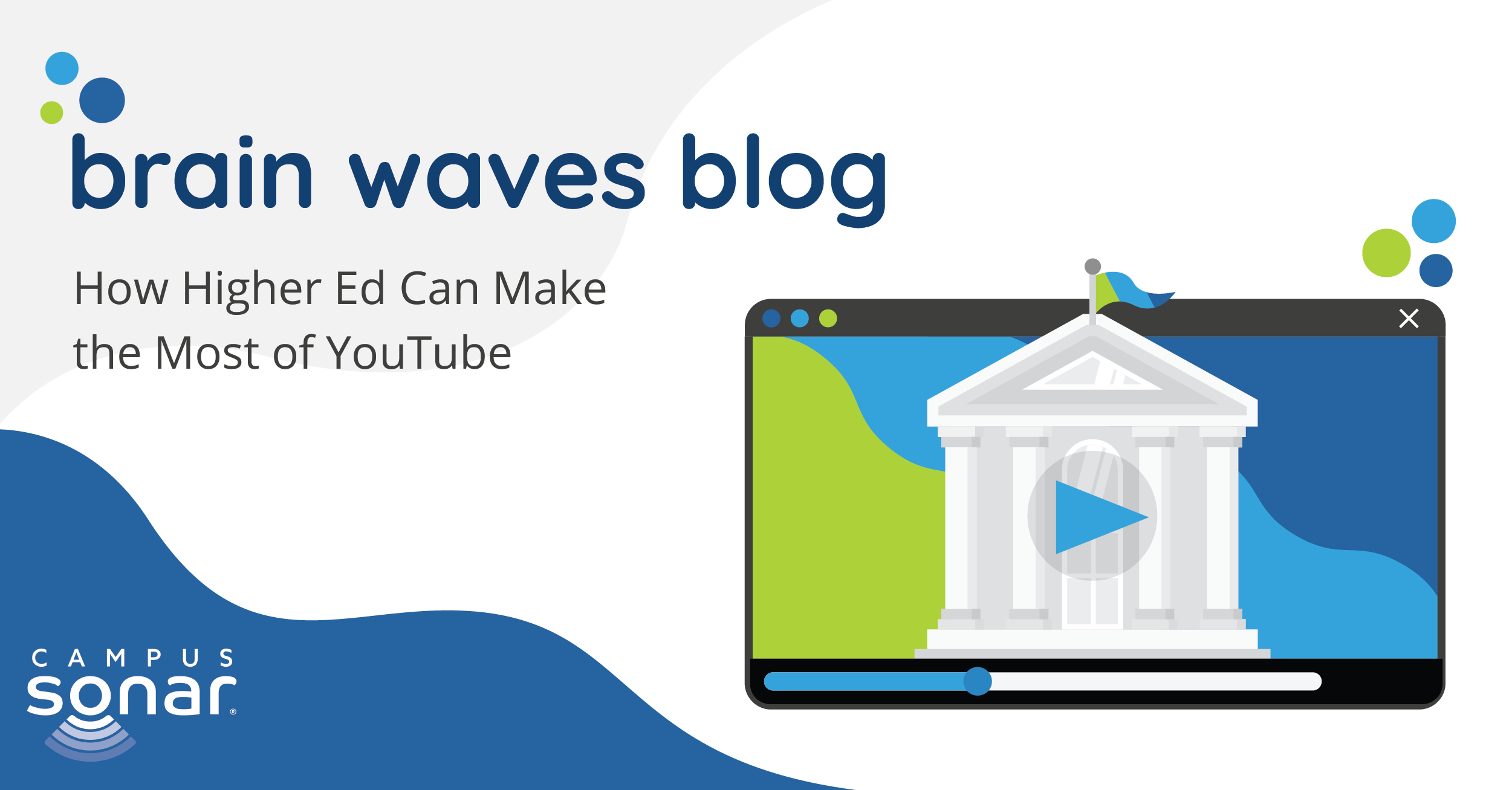 At Duke, we’re operating on the premise that YouTube isn’t just a bucket for holding video content. It’s actually social media. I’ll show you what I mean.

Lots of higher ed campuses and brands use YouTube to house their video content so they can embed it in other places, like on their website. YouTube works great for that, but there are so many more things you can do with it. 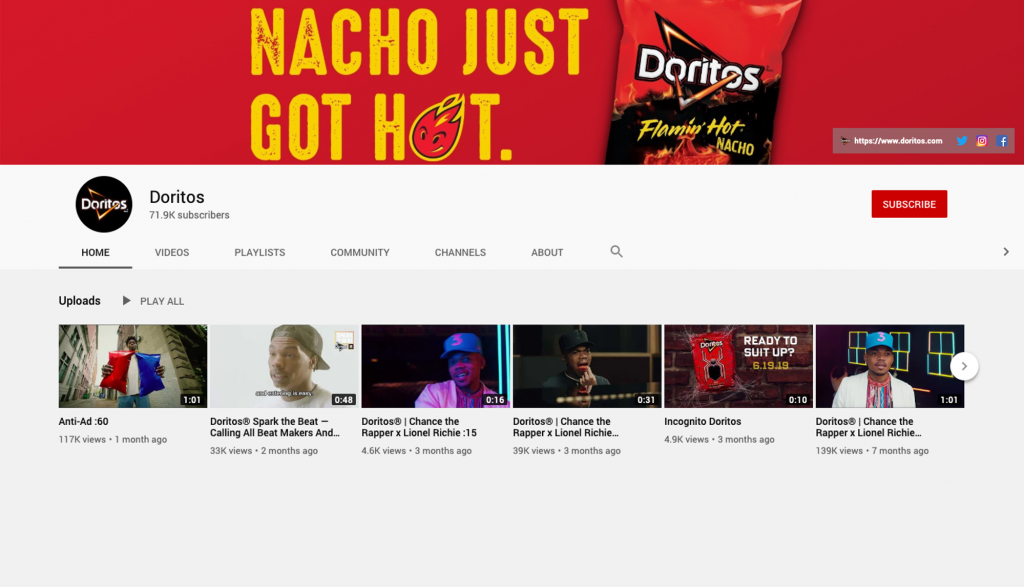 Not bad, and I really love Doritos as a brand. But, here’s the YouTube channel page of one of my favorite YouTubers, Mamrie Hart. 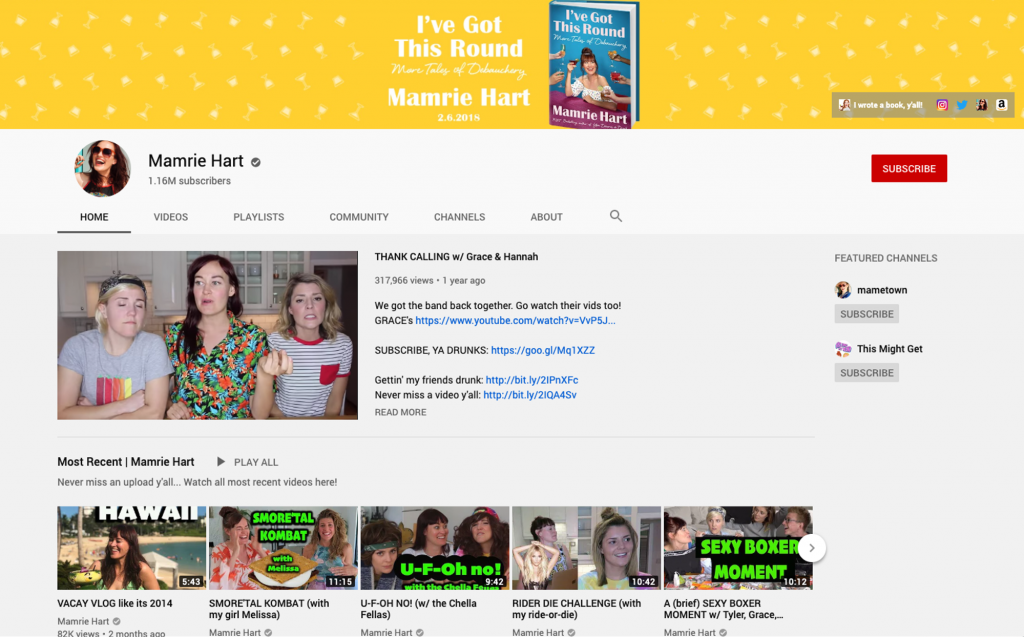 We’ve got the Doritos brand account, which basically holds the video content they’ve already created for somewhere else, like TV or their website. It isn’t using all of the YouTube channel page features, including custom thumbnails and end cards. Plus it has weird titles on the videos.

Let’s break all of these down a bit more.

Why would you want content in a series model? Well, one of the goals of YouTube is to get subscribers, and one way to do that is to have content your potential subscribers can expect to see. We want our subscribers to be obsessed with our content.

Crash Course does an amazing job with series. They have lots of different series on their channel, but they’re all branded a little differently and they all stay on topic. You can have as many series as you want on your channel, and series content is what really gets those subscribe clicks. 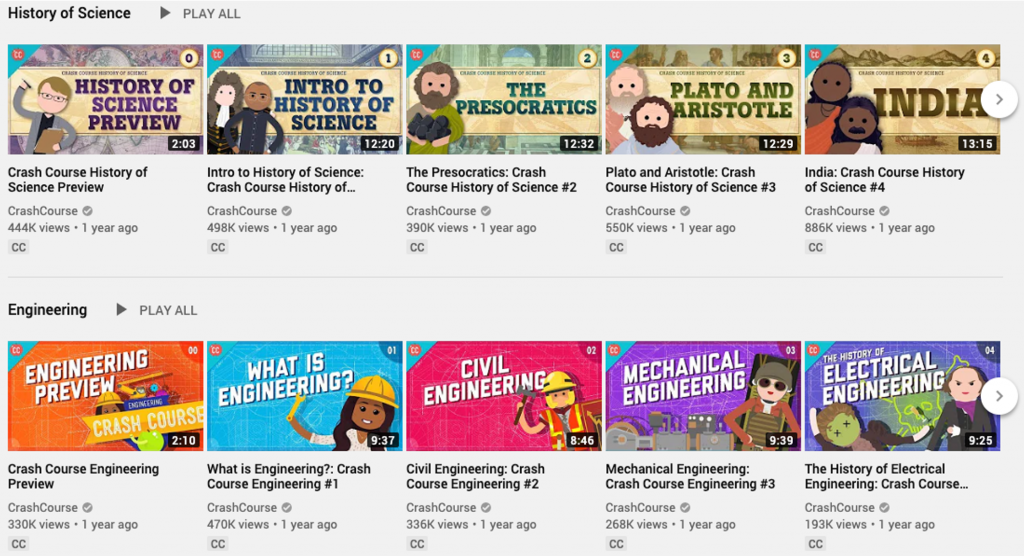 What kind of content should you create? Well, rather than reinventing the wheel, check out Matt Gielen’s The Taxonomy of YouTube Videos. It’ll tell you everything you need to know about what kinds of content work best on YouTube.

Explainers tend to work well for the higher ed space, so a couple of our new series will be this type of video. Extra Credit is a series we recently launched. Here’s one episode.

There are lots of ways to optimize your YouTube channel, beyond just what kind of content you create. Here are my secrets.

Your descriptions should be, well, descriptive. That means they should say what’s actually in the video and use keywords people might use to discover it. Remember, YouTube is the second-largest search engine in the world, behind only Google. Get those keywords in there! Search engines read just like humans do, so be sure to put the most important words and concepts at the beginning of the description. 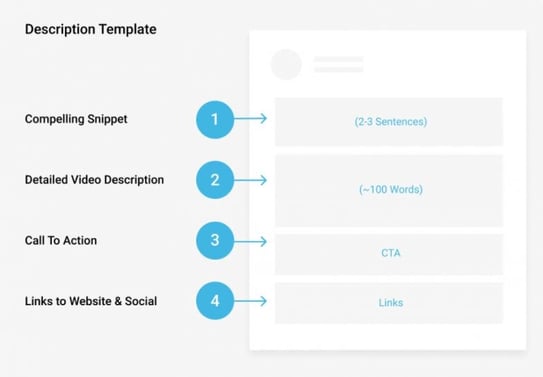 Captioning your videos is not only important for accessibility, but also for search engine optimization. YouTube actually reads the captions you generate to serve up better search results for people. Also, it’s just plain nice to provide captions. Be a good citizen. Caption your videos. 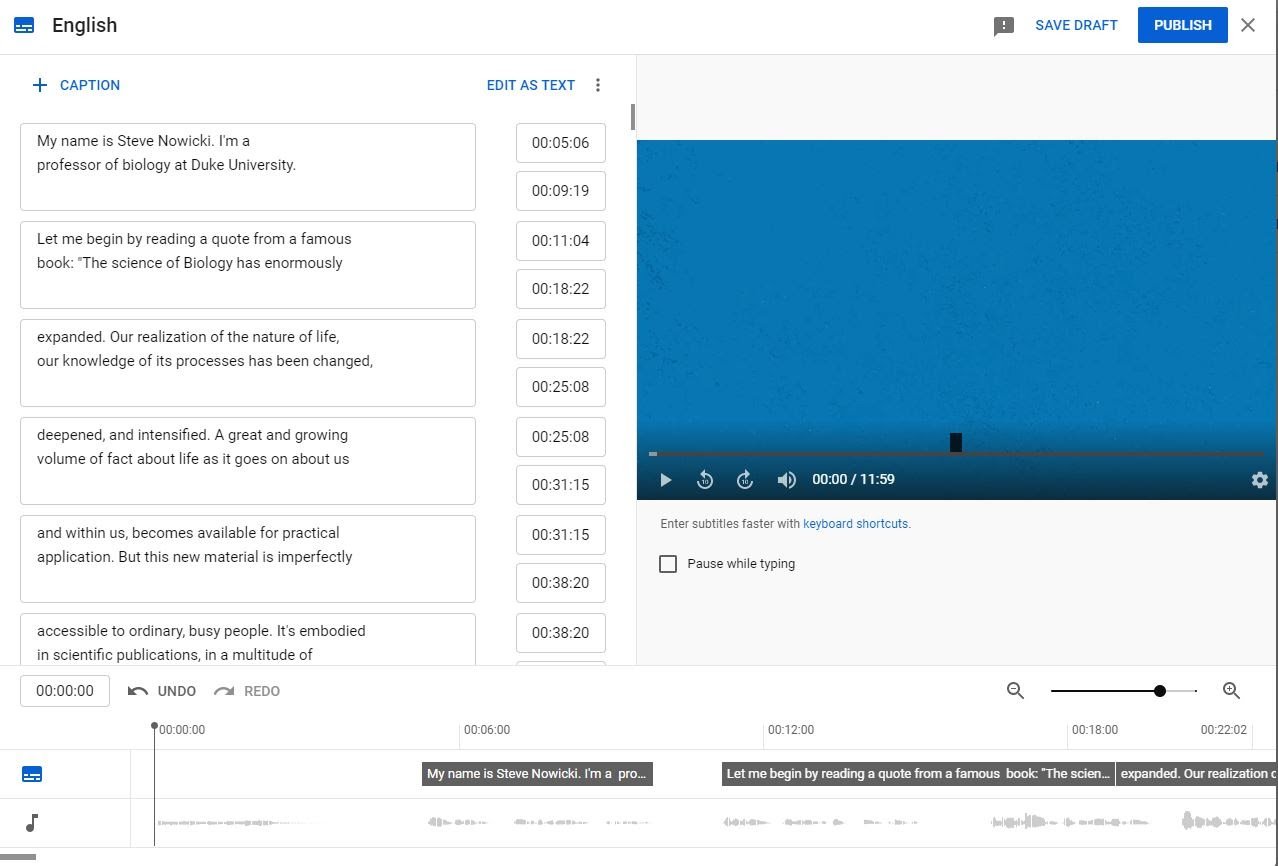 Titles are really important for the search function on YouTube, too. One mistake I see people make with series content is putting the name of the series before the content of the video. This gives the name of the series more weight in the search algorithm, when really people are probably searching for the actual content of your video, not the series name. Here’s how LEGO titled one of their videos in the Rebrickulous series. 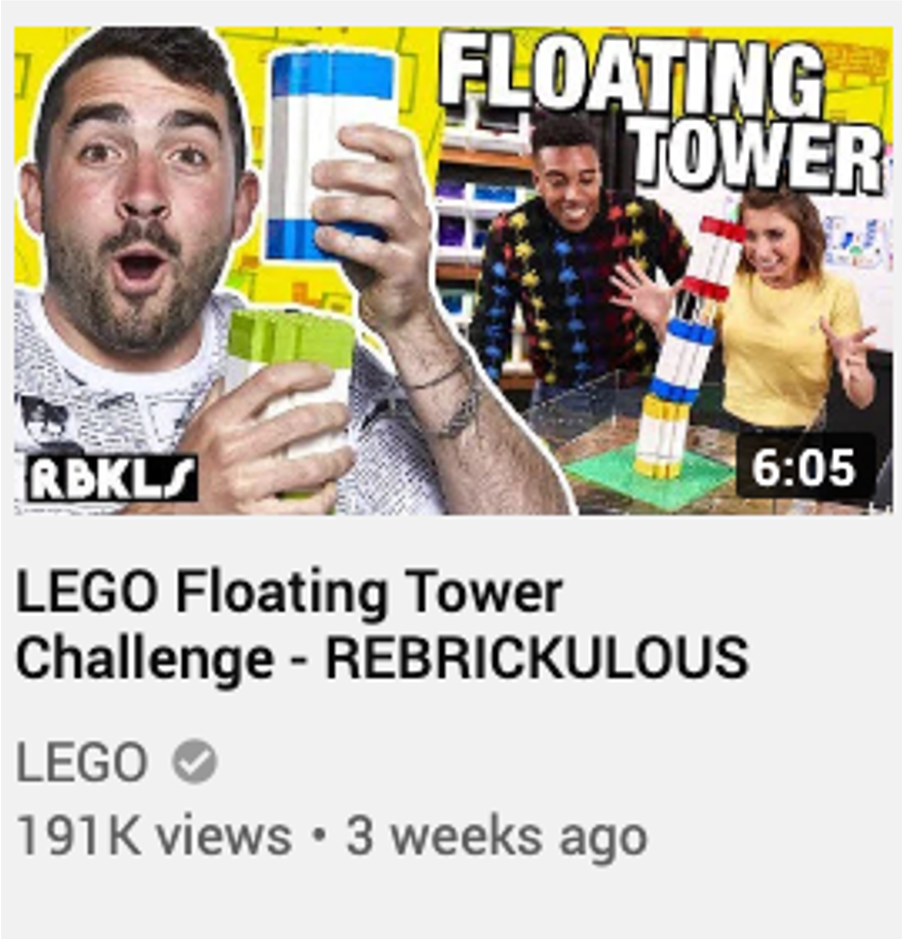 You’ll note that important keywords like “LEGO” and “Challenge” come before the name of the series.

The thumbnails for your video are part of the language of YouTube, and you’re going to look like you know what you’re doing on YouTube if you create YouTube-esque thumbnails. As in the LEGO example above, thumbnails usually have lots of bright colors, pictures of action and people’s faces, and the title of the video. They should look good in a small format. Pro tip: Don’t put your logo or watermark in the bottom right corner, because the time stamp for the video will always go there on the thumbnail.

WVU has some of the best higher ed thumbnails I’ve ever seen.

End screens are a YouTube-only functionality. If you’re using end screens, it tells YouTube viewers that you created this content for them, not for all of your other platforms. It tells them YouTube isn’t an afterthought, but a strategy for you.

Bonus, you can also get some calls to action in your end screens and I know you marketers get all happy about that stuff. (I’m a marketer, too, so I can say that.) Most end screens include a subscribe button and links to other videos people might like to watch next. Here’s ours for the Extra Credit video I previously shared. 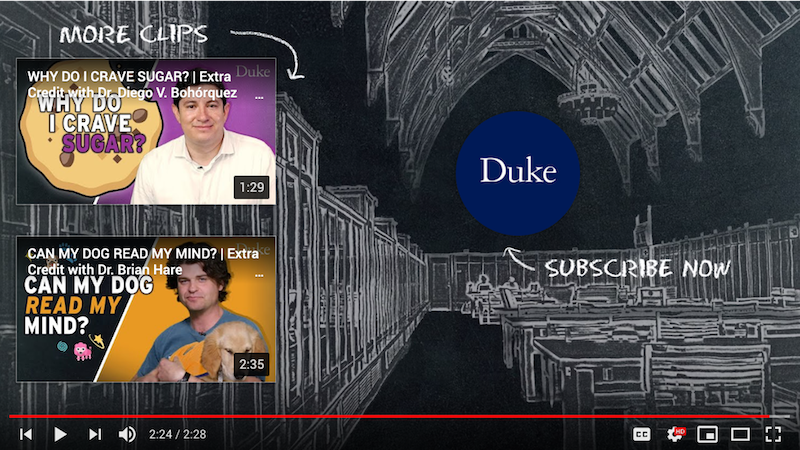 Changing How We Promote Video

Normally when we put video on social media, it makes the most sense to direct-upload the video file to whatever channel we’re using (e.g., Facebook or Twitter). The channel algorithms highly favor direct uploads because it keeps people on that platform rather than sending them somewhere else.

But what do you do when you’ve got a YouTube-first strategy and want people to interact with end screens and hit the subscribe button? Well, you change how you work a bit.

Embedding is, of course, the easiest way to promote YouTube videos. If you’re embedding the YouTube video, you don’t lose any of the functionality like end screens and captions, and all of the views get counted in your YouTube analytics, no matter where the video is embedded.

For Facebook, we’ve experimented  and it seems to work best to link to a Duke Today story where we’ve embedded the video, rather than linking straight to YouTube. The algorithm favors our website over YouTube for some reason.

So Does it Work?

Our preliminary data says yes! We’re getting more views compared to our typical non-series videos and picking up more subscriptions to our channel, but we’ll know more when we have more data. We’re still in the early stages of experimenting with YouTube this way, but we’re super excited about it and we hope you will be, too.

Now that you know how to get found on YouTube, Steve App explains how there’s a lot under the surface on YouTube that you may not even be aware of. He calls it The Iceberg Effect.