Today’s Briefing analyzes publicly available online conversation in the U.S. and on Reddit and YouTube (which span beyond the U.S.) about the coronavirus and higher education from May 4–10. In this analysis of volume, topics, sentiment, and key audiences, we highlight the impact of another viral tweet recommending community college, conversations relevant to recruitment and retention, how students (now alumni) and their friends and family talked about graduation, and the continuing conversation about online classes.

We identified almost 409,000 conversations about the coronavirus and higher education May 4–10, ranging from 33,000 to 93,000 per day—about nine percent more mentions than last week. 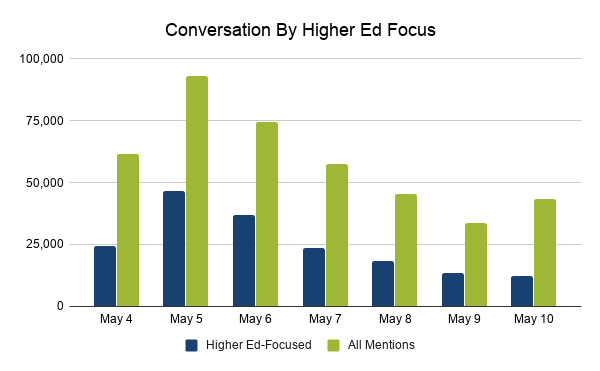 The spike in mentions on May 5 and the trailing elevated volume on May 6 can be almost exclusively attributed to a viral tweet about attending community college in the fall (discussed more in the Community College Topic Propelled by Another Viral Tweet section). The tweet’s contribution to conversation volume also accounted for all but one percent of the week-to-week increase. The following daily volume chart excludes those mentions to demonstrate its impact on the dataset. Twenty-six percent of higher ed-focused mentions referenced the fall semester or later (10 percentage points higher than the prior week), but many of those mentions were also from the viral tweet. After excluding the viral mentions, 10 percent of higher ed-focused mentions referred to the fall semester or beyond, a decrease of six percentage points from the prior week.

Forty-three percent of all mentions were higher ed-focused (38 percent, after excluding the viral tweet). Remember, our industry-level analysis only captures general higher education mentions. If someone mentions the name or acronym of an institution without using a higher ed term (e.g., campus, university, college, classes, etc.), it’s not included in this analysis. Actual volume of conversation across the industry is likely much higher. 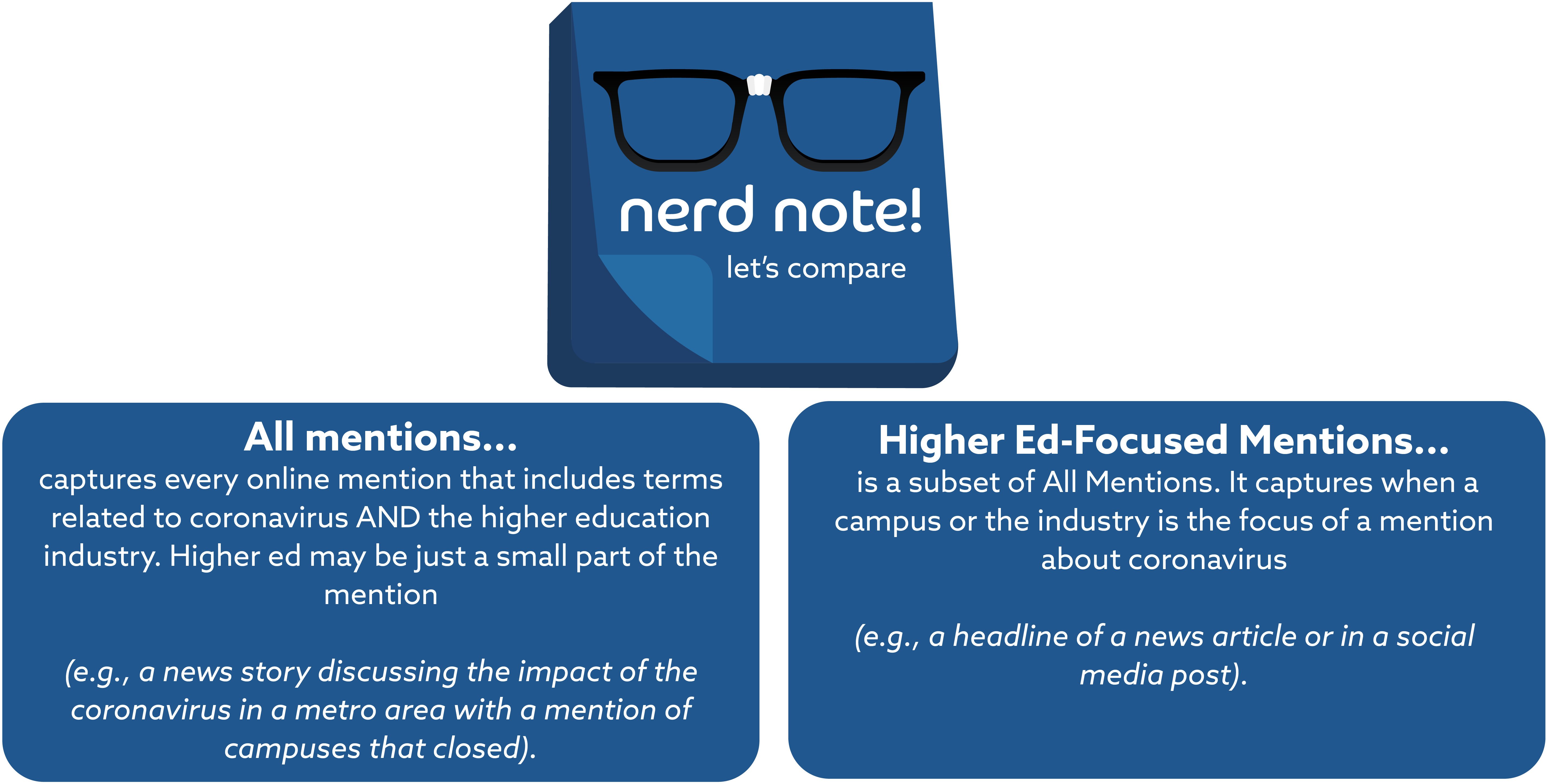 Compared to last week, where the conversation is happening has remained remarkably consistent for all mentions, higher ed-focused mentions, and student mentions. While social media dominates the sources for all mentions (64 percent) and higher ed-focused mentions (72 percent) followed by forums and news, student conversation is identified most frequently on forums (mostly Reddit), which are 63 percent of mentions followed by social media (30 percent) and blogs/Tumbler (7 percent). 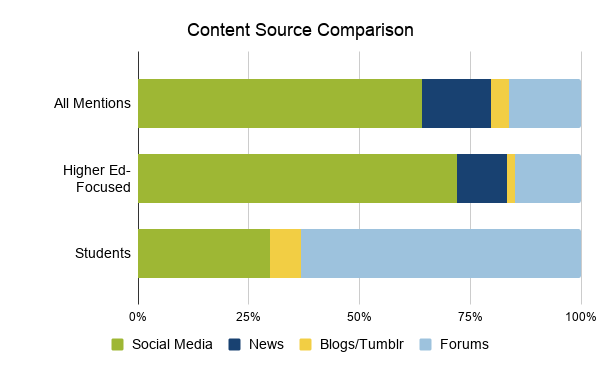 The following word cloud includes the top 100 people, phrases, and emojis in higher ed-focused conversation May 4–10. Once again, community college is at the top of the list, second only to remote learning. Only two other topics in the top 20 were different than what we’ve come to expect: “New York” and a handful of related phrases such as “health department,” “Arizona State University,” and “told a team.” We’ll explore those in this section.

The general public (at least on Twitter) continues to spread the idea that enrolling in a community college this fall may be the smartest option for students. In our May 5 Briefing we highlighted a tweet on the topic. The viral tweet responsible for community college once again being one of the most popular topics was even more popular than last week’s. It had over 400,000 engagements since it was posted on May 4. This tweet alone was responsible for 30,750 mentions in our dataset. Without it, “community college” wouldn’t be among our top ten topics.

“New York” was the sixth most popular topic (more popular than “COVID-19 pandemic”) because The New York Times opinion editor Susan Fowler tweeted that she’s “looking for op-eds from college students about their experiences during the pandemic and what they think about schools reopening.” Her tweet generated thousands of shares and likes and hundreds of replies. So be on the lookout for more high-profile sharing of specific student stories (a continuation of a trend we identified in our March 20 Briefing). In the replies to her tweet, Susan indicated she was seeking perspectives from a variety of institutions, including regional and community colleges. Another contributing factor to New York’s popularity as a topic was because the city, along with colleges around the country, was identified in the Associated Press story U.S. census stirs uncertainty for those displaced by virus. The article, which ran in multiple news outlets, featured a photo of a Florida State University student outside his mother’s home in Georgia.

Arizona State University (ASU) was mentioned after the state’s health department instructed a campus team (and another at the University of Arizona) to stop its work modeling the virus that causes COVID-19 on May 5. The following day, ASU confirmed it intended to continue its work. In both instances, the news spread quickly via Twitter. 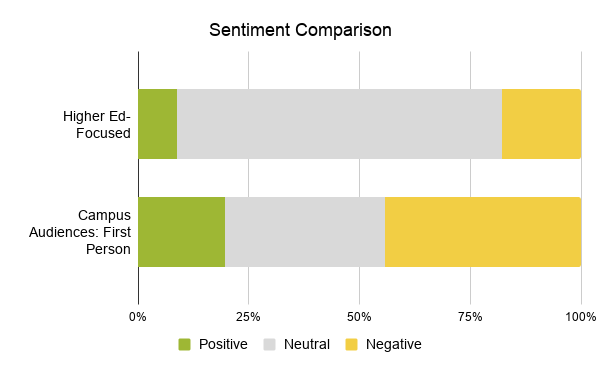 When the conversation is this large it’s hard to find the individual voices. While over 138,000 individual accounts are contributing to higher ed-focused conversation, only three percent of the mentions are first-person accounts from individuals who reveal an affiliation with a campus. These hidden voices represent lived experiences that provide valuable insight as you craft your communication and service delivery. From May 4–10, 79 percent of the first-person conversation was from students, with another 14 percent from family and friends and 5 percent from alumni. 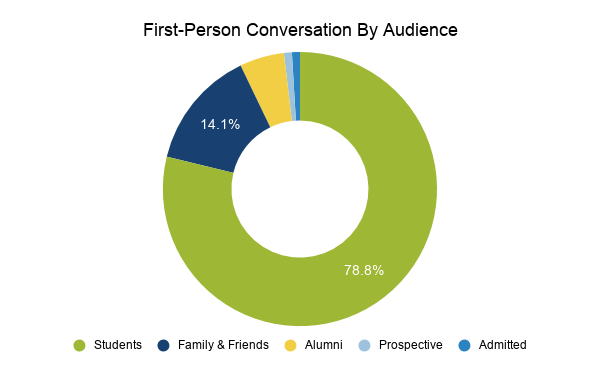 Conversations Related to Recruitment and Retention

Of these topics, “lost opportunities” is the most common in our dataset right now; within the last week, students discussed lost internships and job losses. “Missing campus” and “change of plans” conversations highlight students missing the campus experience (including class) as well as those considering a gap year or community college.

Thinking about transferring is mentioned least frequently. The majority of the recruitment and retention-related mentions we identified were on forums (74 percent), which isn’t surprising given we’ve regularly seen more than half of student conversation in our Briefing dataset come from forums.

The distribution of sadness and joy in the alumni and family and friend audiences was identical. Forty-nine percent of their graduation posts expressed sadness (e.g., family that couldn’t celebrate with their students, disappointment stemming from missed ceremonies, the burning of the graduation tipi at Haskell Indian Nations University), while 42 percent expressed joy, the emotion one might traditionally expect to be associated with graduation.

Online Class Discussion Continues, Even as Classes End for Many

Even as classes wind down for students on the semester schedule, the conversation (and memes) continue. Another “caption this” meme picked up steam, with over 300,000 engagements, expressing quickly disappearing motivation for school after classes went online. If you missed our meme-splainer, check the March 27 Briefing.

Discussion of online classes includes reflections on the semester coming to a close as well as forward-thinking commentary that considers what the fall semester could look like. The top topics converge in this Reddit thread in r/news about the Associated Press story, Unimpressed by online classes, college students seek refunds. There are over 3,000 comments; some of them were pulled into our audience analysis, as people identified as students, alumni, or parents. There’s some really interesting discussion of the perception of college’s value here. The discussion continues in threads discussing the same article in r/coronavirus (300+ comments), r/conservative (40+ comments), and at least one institution-specific subreddit, r/Drexel.

During the seven-day period from May 4–10, conversation increased nine percent compared to the week before—although only one percent after excluding a viral tweet promoting community colleges. The sources for mentions were consistent with last week, with social media dominating all mentions and higher ed-focused mentions, and forums being a more frequent place for conversation from students. Community college was once again a top topic, thanks to that viral tweet. Other unique, popular topics included “New York” and references to Arizona State University and the state’s public health department. In campus audience first-person conversation, graduation was discussed more often by alumni (including new graduates) than family and friends and students. Mentions of graduation were slightly more likely to display sadness than joy.

Looking Ahead to Our Final Briefing

Finally, if you read this far I want you to be the first to know that May 19 will be our final Briefing. We intended to provide this information as long as it was useful. As we head into summer, conversation volume will continue to be lower, students will move even more to discussing their specific institutions versus the industry as a whole, and you’ll be deep into your plans for the fall. Next week I’ll summarize one week of conversation per normal, and also provide a summary overview of what we learned from 10 weeks of Briefings and over seven million online conversations.