Today’s Briefing analyzes publicly available online conversation in the U.S. and on Reddit and YouTube (which span beyond the U.S.) about the coronavirus and higher education from April 20–26. In this analysis of volume, topics, sentiment, and key audiences, we highlight how university research news spreads via online influencers, student athletes seeking new teams, and students continuing to speculate about the fall semester on Reddit.

Slightly Less Conversation, but a Larger Percentage about Fall Semester or Beyond

We identified about 442,000 mentions of the coronavirus and higher education April 20–26, ranging from 36,000–79,000 mentions per day. This is about seven percent fewer mentions than the week earlier. Eight percent of all mentions related to the fall semester or beyond (three percentage points higher than last week). 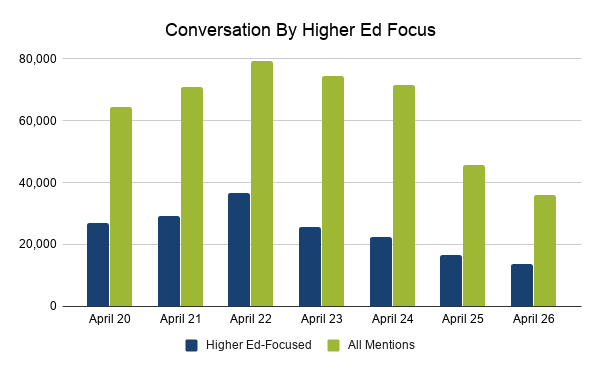 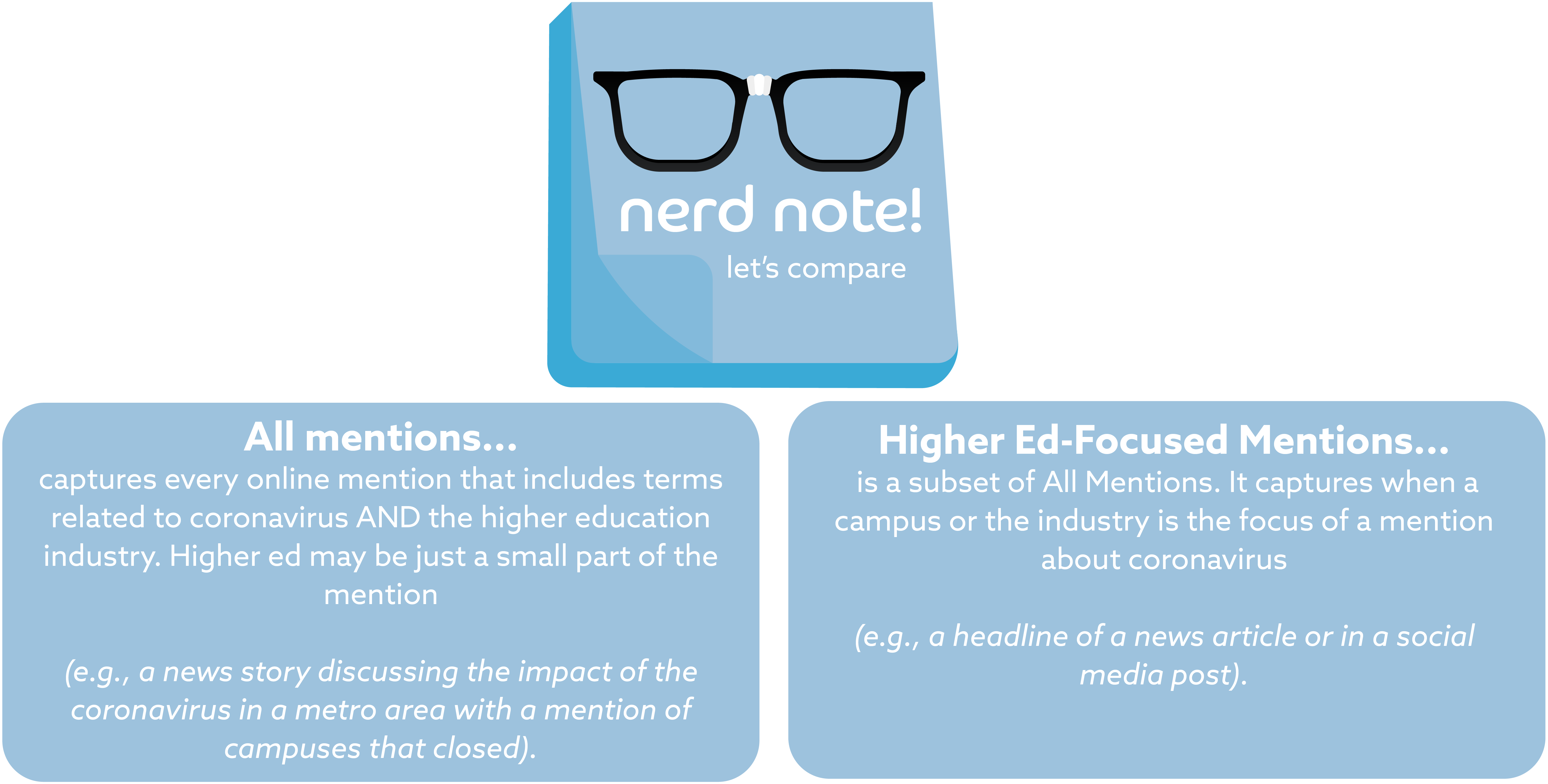 Social media was the largest source for all mentions, higher ed-focused mentions, and student mentions. The most common source for mentions of the fall semester and beyond was news sites; 50 percent of mentions referencing the fall were in the news, compared to 27 percent last week. The percentage of student conversation on social media (59 percent) was higher than previous Briefings, largely because of a student-driven word-of-mouth Twitter campaign from a specific institution, detailed in the Audience Insights section. 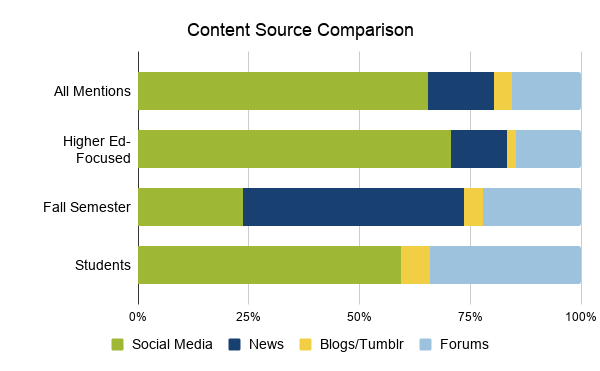 The following word cloud includes the top 100 people, phrases, and emojis in higher ed-focused conversation April 20–26. Today’s Briefing reviews the top 10 topics and highlights the institutions within the top 20 topics. Personally, I was surprised that neither Purdue nor its president Mitch Daniels were mentioned in top topics, but that could be because the mentions of their announcement regarding fall and related discussion referred simply to “Purdue” without other higher education terms (mentions like that would not be captured in our industry dataset).

The general topics of coronavirus, COVID-19, college students, and remote/online learning and online classes continue to be our most common topics. Next is “Trump,” which is used in a variety of contexts. Urbana University announced on April 21 that it would discontinue physical operations at the end of the 2020 spring semester. Discussion of the closing made it number 8 on our top topics list, and half of the approximately 4,750 mentions were from affected students and others amplifying their message. We’ll dig deeper into that in the later Audience Insights section. “State University” and “research universities” were right behind Urbana University as top topics 9 and 10; those around 6,000 mentions referred to many public, state institutions and members of the Association of American Universities (AAU).

#ProudToBeOnTheirTeam is a social media campaign from the AAU and their member institutions’ athletics representatives, proclaiming they stand with their colleagues and “America’s leading research universities as they take the fight to COVID-19 in our labs and hospitals.” The AAU shared a Twitter moment highlighting contributions from coaches and players. This was the third most popular hashtag in our higher ed-focused dataset, with 2,550 mentions and an estimated 38.7 million impressions.

Tracing the Spread of University Research News on Social Media

On Friday, April 24, the Miami Herald reported on a University of Miami project that tested about 1,400 people in Miami-Dade county for COVID-19 antibodies over a period of two weeks. University researchers estimate that the true amount of infection lies between 4.4–7.9 percent of the population, with 6 percent being the best estimate. While the university was mentioned as the news spread, various implications of the findings were emphasized depending on the source when it was shared on social media. Examining the spread of this news in the 2.5 days following the press conference offers an interesting case study in the role of social media influence during breaking news. 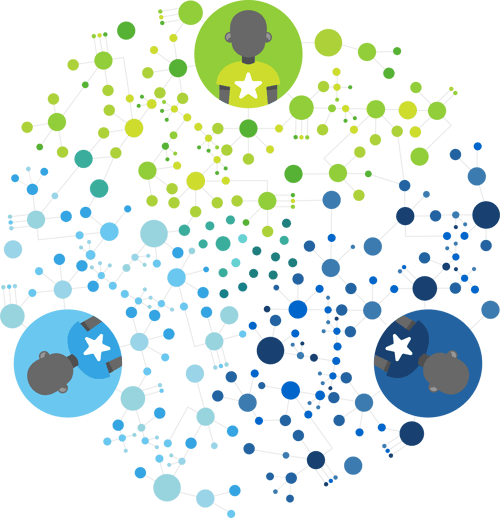 The first mention in our dataset was a tweet from a reporter at the South Florida Business Journal. It stuck to the facts, but only received four retweets and likes despite his over 9,000 followers. The Miami Herald’s tweet a few hours earlier received less than 100 retweets and likes from its over 460,000 followers. The thousands of shares of this study from Friday through the weekend that launched it into our top 20 higher ed-focused topics can be attributed largely to four individuals with online influence. 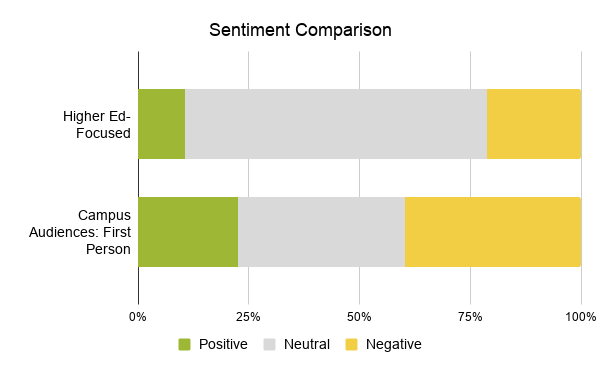 When the conversation is this large it’s hard to find the individual voices. While over 128,000 individual accounts contributed to higher ed-focused conversation, only four percent of the mentions were first person accounts from individuals who revealed their current student status. These hidden voices represent lived experiences that provide valuable insight as you craft your communication and service delivery.

For the first time in our Briefings, a specific institution dominated the student conversation, accounting for 30 percent of student mentions. On April 21, Urbana University, a branch campus of Franklin University, announced it would cease physical operations this spring, leaving its roughly 350 residential and commuter students exploring their options for the fall semester. Even before the campus sent its first official tweet about the news at 11:33 a.m. ET, its NCAA Division II student athletes took to Twitter to announce they were “looking for a new home” and noting their remaining years of eligibility. Despite most athletes having modest followings, their pleas were liked and retweeted at a high rate, almost immediately. The majority of their activity occurred on April 21, with some lingering shares on the following days. The following chart shows the number of tweets and retweets per hour from the Urbana University student athletes April 21–22. 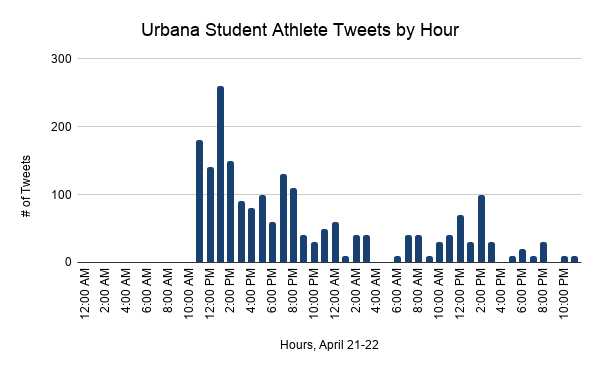 The university’s Office of Compliance issued a statement granting its athletes permission to contact any institution following the discontinuation of its sports programs.

What Students Are Angry About

The two most predominant emotions in student conversation since we started the Briefings are anger and sadness. After excluding the Urbana student athletes, 44 percent of student mentions that expressed emotion conveyed anger. Here are the top 20 topics students who expressed anger discussed.

You’ll notice more mentions of makeup artist and online celebrity Jeffree Star, who first appeared in our March 31 Briefing. On April 21, Jeffree once again told Twitter followers they had a chance to get their bills paid, and students responded stating the need caused by campus closures. They were among over 127,000 responses to Jeffree’s post.

Current students discussed whether courses would be online or in person in the fall in this “megathread” in r/college, starting on Friday, April 24. Multiple commenters mention they know “schools need their money.” There are interesting reports of what students have heard from campus staff (e.g., advisors, instructors, department heads, student employment supervisors), even if their campus hasn’t made an announcement yet. The following are quotes from the thread.

At least one student clearly stated they were looking to Reddit (specifically, the megathread) for information about their specific institution because they hadn’t heard anything. Another said, “A college confirming now means nothing. I wouldn’t trust confirmations until like mid July.” Yet another commenter said that their department told them if they’re online next semester, some students won’t be able to take courses required for their major.

Conversation volume decreased slightly compared to last week. Eight percent of mentions referenced the fall semester or beyond, up from five percent last week. 39 percent of mentions were higher ed-focused. Conversation sources for all mentions and higher ed-focused mentions were distributed similarly to the prior week. Half of mentions related to the fall semester appeared on news sites, an increase from 27 percent the prior week. Top higher ed-focused conversation topics referenced general pandemic and university terms, and specifically mentioned Urbana University (closing Spring 2020)and both the University of Chicago and the University of Miami, whose antibody test news spread via online influencers more than traditional media. Sentiment was fairly consistent with last week. Student conversation was dominated by displaced Urbana student athletes (30 percent of student conversation). Top topics of angry students included online classes, college graduation, and job loss. Students continued to speculate about the fall semester on Reddit, sharing gossip they’d heard from campus staff members.

We’ll be back on Tuesday, May 5 with our next Briefing. There’s a special treat for you this week. On Thursday, April 30, at 1:00 p.m. CDT, Steve App and I will share a summary of our Briefing research on current students, admitted students, and their parents in a webinar sponsored by the Southern Regional Education Board. Register now to join us for that discussion.