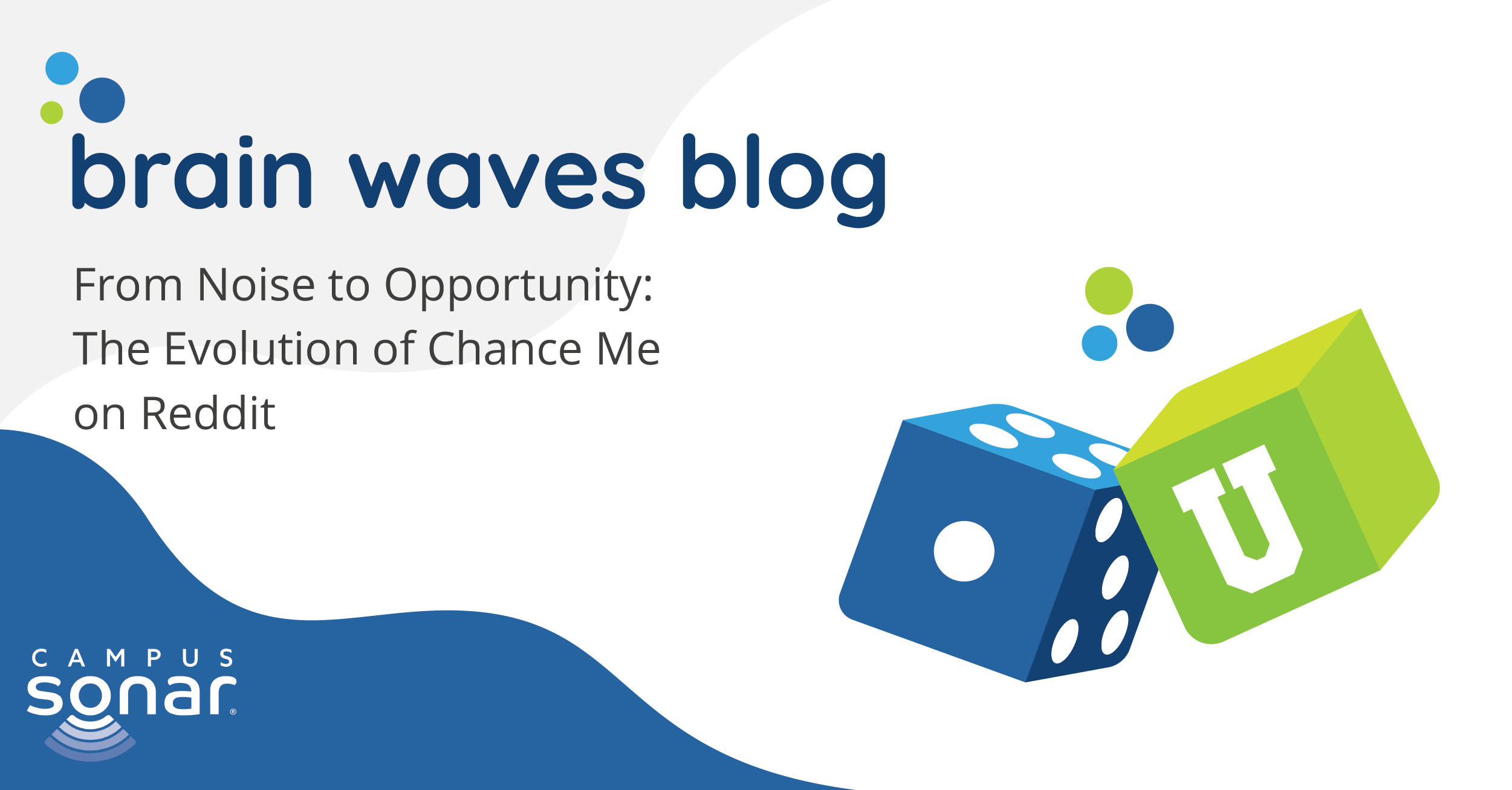 If Chance Me posts are too radioactive to get involved with, Reverse Chance Me offers an opportunity to increase the top of your funnel or perform market research.

What are my chances of getting into [insert College of University here]? It’s a question that’s been asked for decades, with admissions officers, parents, guidance counselors, alumni, tour guides, and tutors all recipients most are unqualified to answer.

But in recent years, this question has increasingly taken place in a different environment: the internet. And more specifically, within forums like College Confidential and Reddit.

What is a “Chance Me” post? It includes a student sharing a post listing their academic merits, demographics, test scores, extracurricular activities, awards, letters of recommendation, etc., along with a simple question: “What are my chances of getting in?”

In some cases, students are interested in a single campus, like this student trying to gauge her odds at Georgia Tech. (She’s a shoo-in, according to her fellow Redditors.)

Others want to know if they’ll make it in at an Ivy or T20, like this student interested in MIT, UPenn, UChicago, Caltech, and Washu. (He’s a strong applicant, and Redditors think he should consider adding a few campuses to his consideration set.)

The rise of Chance Me posts didn’t happen overnight. r/ChanceMe became an official subreddit in June 2014, but growth in the community came slowly—by January 2017, the subreddit had only 2,282 members. Instead, many Chance Me posts occurred on College Confidential or the more popular subreddit r/ApplyingToCollege, which had five times the membership as r/ChanceMe in January 2017.

But like other higher ed-focused subreddits, the Chance Me subreddit grew exponentially beginning with the start of the 2017–2018 recruiting cycle—from 2,750 members in June 2017 to more than 63,000 members by December 2020. The growth was partially fueled when the moderators of r/ApplyingToCollege began cracking down and removing Chance Me posts in 2017. (The most recent set of rules for the community include language referring to the ban on Chance Me posts, with a recommendation to post those questions to r/ChanceMe instead.) Currently, r/ChanceMe has more than 75,000 members, and research by Campus Sonar, available in full to STREAM members, shows r/ChanceMe is the second most popular subreddit for conversation from prospective college students.

Despite its popularity, many college admissions professionals are unaware of the Chance Me phenomenon, and those who are aware are largely dismissive of the practice, if not empathetic to the emotions driving students to participate.

Why so dismissive? Admissions professionals understand the nuance of admissions decisions in a way that prospective students do not and can not. GPAs vary widely campus to campus, for example, and admissions decisions will depend, at least to some extent, on the priorities of each campus, which can’t be known by those replying to such posts.

That sense of misaligned expectations was also behind the decision to ban Chance Me posts from the ApplyingToCollege subreddit in 2017. “No one outside of an admissions office can predict how an individual reader on an individual day is going to feel about an application,” says Carolyn Caplan, better known as u/AdmissionsMom, an A2C moderator since 2017. She adds that every year, there are high achieving students with every statistic a campus is theoretically looking for who experience disappointing results.

On the flip side, students with life experiences and applications that might appeal to admissions may be discouraged from applying to certain schools through Chance Me posts. “Mostly, there’s no way high school kids, college kids, and parents—those who make up the bulk of our community can predict. So, we work really hard on managing expectations—one way or the other.”

It should be noted that many prospective and admitted students abhor the idea, often mocking Chance Me posts and describing the practice as a selfish request for validation, though the posts also have defenders.

If Chance Me posts are a popular (if untouchable) aspect of forums, then their inverted Reddit cousin, Reverse Chance Me, presents an opportunity for marketers and admissions pros alike.

Reverse Chance Me, or Match Me as it’s referred to on College Confidential, is a post where a student shares many of the same attributes, but with the goal of understanding what campuses they should consider researching or applying to. In essence, it’s a public form of crowdsourcing their college list.

Reverse Chance Me posts have a dedicated subreddit, r/ReverseChanceMe, which was created in 2016. User growth has been slow—with currently a little more than 3,200 members. That slow growth is likely due, at least in part, to the decision from the r/ApplyingToCollege moderators to continue allowing Reverse Chance Me posts in the subreddit.

“We have [in the subreddit] a lot of first-gen kids and kids from every teeny tiny corner of the U.S. and the world,” says Caplan. “They might not come from a college-going culture or have a history of students who go out of state in their school, so they have no historical view to understand what’s happening. I feel a big part of our mission is to provide context for them, and while we don’t do it in the form of Chance Me posts, we love Reverse Chance Me posts and offering them places to research about and add to their lists.”

One student was looking for, among other things, an academically oriented, LGBTQ+ inclusive campus near the wilderness and far from the south. The top comment, from a fellow high school senior, recommended the Colorado School of Mines and Case Western Reserve. Another asked if the OP had considered historically women’s colleges.

Another student, enrolled in a college that didn’t feel right, wanted another shot at finding their dream school via transfer. One commenter quoted multiple parts of the original post in their response, subtly suggesting Georgetown. [Narrator: it wasn’t subtle.]

And while campus administrators are right to largely avoid Chance Me posts, there are ways to benefit from, or strategically engage with, its reversed version. I’ve identified these opportunities and, since not everyone has the same comfort level with Reddit, labeled them as a match for someone at the beginner, intermediate, or advanced level.

At a minimum, Reverse Chance Me posts offer an incredible opportunity for free market research and competitive intelligence. You know, the kind that usually costs anywhere between a few pizzas and tens of thousands of dollars.

Start by navigating to r/ReverseChanceMe and search for your campus name. If you come up empty, give it a shot in r/ApplyingToCollege. When you find mentions of your campus, document why you’re identified as a right fit campus for a student. Are you perceived as a party campus? Do you have a reputation for having an inclusive culture? Is your geographical location a large part of your appeal? When one Florida-based student sought college options, they shared concerns about their academic stats and voiced their desire to stay in-state. One commenter suggested Florida International University (FIU) because they accepted over half their applicants.

Alternatively, pay attention to the campuses you’re mentioned alongside. Are they campuses you expect to compete with? When you spot what look like outliers, investigate the reason you were lumped together. You may find that your competitive set is larger than you think.

For example, Rose-Hulman Institute of Technology is mentioned alongside Colorado School of Mines and Harvey Mudd in one Reddit post because they share higher acceptance rates than T20s, but offer solid career outcomes for STEM grads. But in another post, it’s mentioned alongside Worcester Polytechnic Institute (WPI), Milwaukee School of Engineering (MSOE), and Illinois Tech, because it’s a private engineering school focused primarily on its undergrad program.

The key benefit at the beginner level is that you don’t have to engage with your target audience to gain insight into their thought process. You just need to know how to do the equivalent of a Google search.

If you’re looking to level up your activity and increase the top of your admissions funnel, consider engaging in these posts by promoting your campus. Except, you shouldn’t personally engage. Instead, task a student ambassador—one preferably already comfortable with Reddit, like this student at Johns Hopkins University—with commenting on the post.

Questions like this are a no fly zone for administrators, as detailed in this blog post about common questions students ask on Reddit. But a student’s comment vouching for their experience carries an additional element of validity when mixed with other prospective students who can’t share their first-hand experiences.

It’s important, however, that you don’t tell student ambassadors what to say. Reddit can spot a spy from a mile away. Instead, seek out students already saying nice things about your campus, and trust they’ll continue to do so when offered the opportunity to engage again.

The advanced level is about combining the beginner and intermediate levels, with a twist. Instead of searching for your campus name and noting other campuses mentioned alongside yours, search for those competing campuses directly.

When you find a post where a commenter suggests a competing campus, and you feel yours should also be considered based on the OP’s credentials and desired campus attributes, send the post to your student ambassador. They can add a comment to the post explaining why they think the OP should consider your campus.

Depending on your campus’s size, admissions rate, and reputation, manually finding these posts may be challenging. There are free tools to help you automate the process; IFTTT, for example, has a number of Reddit recipes that support minimal Boolean language. And, of course, Campus Sonar analysts have written queries that find specific competitor matches, combinations, or opportunities to engage.

Reverse Chance Me posts offer yet another opportunity for marketing and admissions professionals to pull value from internet forums like Reddit. But regardless of the level you’re comfortable contributing at, remember that engaging on Reddit isn’t so much about blindly promoting your campus as it is offering value and guidance to prospective and admitted students.

“The fact is that high schoolers are more lonely and anxious than ever before and this subreddit [r/ApplyingToCollege] is acting like a hand and voice in the darkness for many teenagers who either won't reach out or don't have anyone to reach out to,” says Caplan. Reddit may be anonymous, but it’s a genuinely trusted place for prospective college students. We’re all responsible for keeping it that way.

Read more of Steve's insights on Reddit and how you can use it to inform your strategy.