Hashtags are a symbol that for the longest time was really only found on a button on your phone (yes, there were these things called “landlines” with physical buttons). But now the omnipresent hashtag is something more—an organizer used to group social content that evolved in programming and has seeped its way into many social media sites. Not only does it organize content, it mobilizes movements. There’s a lot to discuss with these little guys—owning them, “owning” them, and why they matter in higher ed.

Ownership. Everyone loves to own something. An education. A car. A home. An ice scraper in Wisconsin. Hashtags are no different—especially to the people in charge of social media marketing where there is so much content. You wonder, “there has to be a way to stand out, a way to be consistently recognized as different from competitors...”

Then you (the proverbial “you”) nail it—in a caffeine-fueled “Eureka!” moment, you come up with the perfect descriptive, catchy, emotive, and distinctive hashtag to describe your brand. Standing on the shoulders of giants, you imagine your campaign will be similar to the likes of other great hashtag campaigns that came before you (what’s up #ShareACoke, #IceBucketChallenge, #LikeAGirl, and #LetsDoLunch).

You wrote it, you own it, right? It’s all yours.

Now, I’m no lawyer, but based on my research, no person or company can own a hashtag in the legal copyright sense where no one else can use it ever except for you forever and always. Even if you coined an #exclusive phrase within your company (good job, you), it’s not solely yours or your company’s. At most, if you’re using the hashtag in association with selling or promoting a product or service, you might be able to trademark it with the United States Patent and Trademark Office; even then, that doesn’t technically prevent others from using it without your permission. Trademarking does, however, prevent others in your market from using the hashtag in competition with you.

You can’t own a hashtag, but you certainly can “own” it. Look at the #IceBucketChallenge campaign. Did other organizations besides the ALS Association use that hashtag as part of a different campaign? Probably not, and even if others tried, you don’t remember it. Why? Because while the ALS Association doesn’t legally own the hashtag, they certainly “owned” it in the less formal sense of the word. But how?

There are strategies individuals and companies can use to create and implement hashtags in ways that align with their brand strategy so much so that that everyone and their mother assumes that the company must have exclusive rights to the hashtag (except for you because you read this post and learned that no one can legally own a hashtag).

How to “Own” a Hashtag (From Creation to Implementation)

Those are the basics—you can’t own a hashtag, but you can build brand alignment with your hashtag so you “own” it. Not everyone knows the why behind building out that alignment or association, so let’s take a peek at an example to explain why “owning” a hashtag is critical.

Part of a Brand Diagnostic from Campus Sonar is a call with one of our team members and a brief survey. The survey responses help the analyst (e.g., me) develop the query we use in the diagnostic. One question asks about the hashtags the institution frequently uses. We include the hashtags that campuses tell us they “own” in their query. 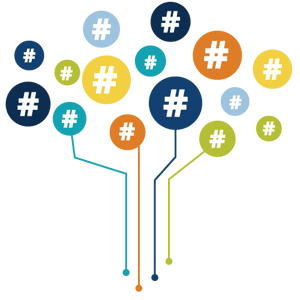 When reviewing information from a college (let’s call them Jeppson College because that’s fun) to write a query for their diagnostic, I noticed they said they used an athletics-related hashtag a lot—let’s say, #gotigers. I felt uneasy putting the hashtag into the query because I had a hunch it wasn’t unique to Jeppson College and would result in hundreds of irrelevant mentions. I checked Twitter for #gotigers and wouldn’t you know it, this returned A LOT of data, for many different schools. While Jeppson College used the hashtag a lot, it wasn’t specific to them. They were getting lost in a sea of other tigers—and my colleagues tell me that while I may be new around here, this is far from the first time this has happened.

The story of mistaken hashtag identity happens often, so what could Jeppson College do differently? Perhaps add an identifier to separate them from the pack—something like #JeppsonTigers or #GoJeppsonTigers—you get the idea.

We learn as children that sharing is important, but as a marketer, you learn that being selfish with brand-aligned hashtags is critical for success. Sharing a generic hashtag with other organizations causes brand confusion and adds the risk of your message getting lost.

What this Means in Practice

This means a great deal to the higher ed professional. A hashtag means nothing unless it's effectively used. Institutions that are grounded in listening, community building, promotion, and connection use hashtags to support their enterprise to:

In the end, no matter who you are or which company or college you work for, the best advice on “owning” your hashtag, or strategically using a unique hashtag to associate with your brand, is to do your research. Create a dynamite hashtag by thinking about your brand, considering how you want to express it, and nailing that without causing brand confusion or suffering a social media #fail. Then implement the dang thing: use it to listen, build communities, promote, and appeal to your audience.

Lean all the way into it.