People love sports. Campus Sonar has worked with smaller schools with Division II or Division III athletics programs, and although their sports teams aren’t nationally known, we were surprised to find that athletics still made up a large portion of the schools’ online conversations. Athletics conversation can go beyond students/alumni at your school, since avid sports fans also add to the conversation. For example, as Campus Sonar’s resident sports fan, I’ve been watching sports as long as I can remember. I grew up rooting for the Wisconsin Badgers due to the proximity of my hometown to the campus and the lack of other Division I teams in the state, and I often participate in online conversations about their various sports teams, even though I went to a different state school for college. Using the methodology of conversation analysis, you can segment the conversation to get the heart of what your audience is talking about.

Tips on Segmenting the Conversation

You might need to tweak the rule and do some manual adjustments as you see more common terms pop up regularly, but this will give you a good start at seeing how much of the conversation is/isn’t about athletics.

The Proof Is in the Emojis

A picture is worth a thousand words, and in the social media world these days, those pictures are in the form of emojis.

Much like topic clouds, emoji clouds are a graphical representation of the most used emojis in a given time. The bigger the emoji, the more often it was used. The following is an example of one week of a school’s entire conversation. At a glance, we can see how prevalent athletics is to the conversation. 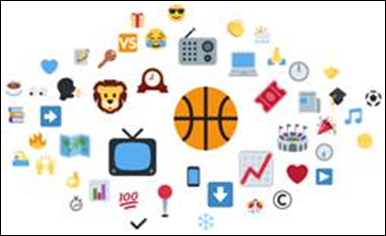 When we remove athletics from the conversation, the emoji cloud changes significantly. Now things like love, graduation, and books are more visible. Interestingly, we can see that the lion, the school’s mascot that is often associated with athletics, is also frequently used in non-athletics conversation. Taking out the noise of athletics can bring attention to other topics that resonate with your audience and help you focus your message accordingly.

Will You Embrace or Ignore the Athletics Conversation?

The post Athletics: Getting Past the Madness originally appeared on the Campus Sonar Brain Waves blog.