In Social, Sometimes the Best Advice Is to Shut Up and Listen

Sometimes the toughest thing to do in social media is not to say anything at all.

You know the urges. Someone said something about your school. A dean somewhere opens their Facebook account for the first time in a month, sees the comment and wants something done about it. Or there’s a Twitter conversation that you think would benefit from the school’s perspective, but you haven’t been officially tagged. Should you jump in? 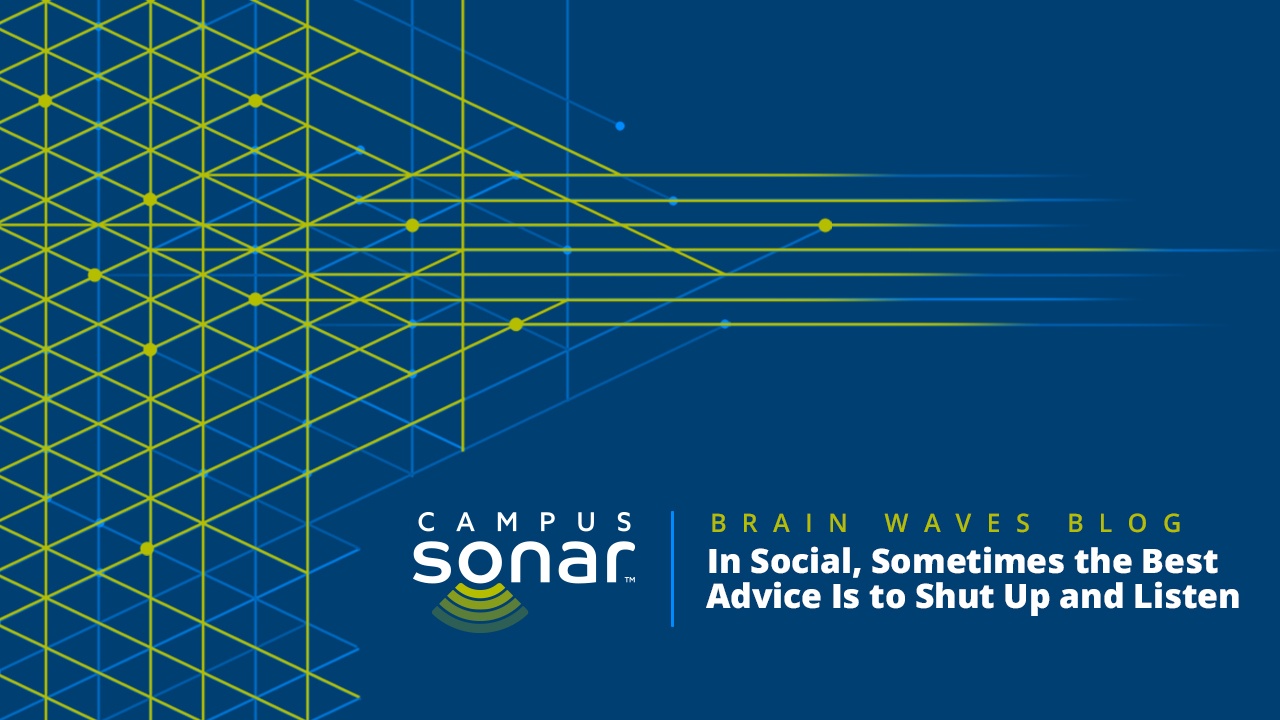 As the defender of your brand on social media, your instincts are usually screaming,

"Yes! We need to answer all the charges and inform the uniformed!"

But despite those urges, sometimes the best thing to do is to shut up and listen.

There’s nowhere on social media where the need to hush and listen is more important than on Reddit. That’s a lesson I learned quickly when I came to Rochester Institute of Technology (RIT) in May 2017.

RIT developed one of the most active collegiate subreddits around over the years (at one time it was listed as the second most trafficked college or university subreddit), and they did it independently of university marketing or public relations initiative. The community was created by alumni and current students and it’s continued to thrive.

In short, they’d gotten along just fine without university officials butting in.

That success though, presents a conundrum—there’s nearly 10,000 pairs of eyeballs that you could be communicating with, but in all likelihood they feel as if they don’t need you. What do you do?

In our case, we decided to:

Actively Shut Up and Listen

We calculated that we’ll understand our audience and the student experience better by listening to what they’re saying first, instead of building a content-producing strategy around Reddit. And we view ourselves as guests in the community’s space, so we gain insight through proactive silence. The fact that the RIT brand is not omnipresent in the subreddit gives a layer of authenticity that frankly isn’t present in other forums where users know the brand is either in charge or watching from a branded account.

We ask permission. I introduced myself to the moderators of the subreddit first via direct message and asked permission to make an introductory post. We’ve asked other offices on campus to introduce themselves to the mods in similar fashion if they’re seeking to join the subreddit.

We don’t have an “RIT” Reddit account for the whole university. Some university offices have accounts, but we advise those offices to use Reddit as a listening platform first and foremost.

We try not to start threads unless we have a very good reason. We may want to promote an AMA with a faculty member or our president. But we’re not sharing news releases—the community already does that on its own.

We monitor the subreddit repeatedly during the day. We have a student worker on staff and part of her job is to keep tabs on Reddit throughout her shift.

We reply infrequently. We’re in the process of establishing an admissions office account to help with admissions-related questions and we have a student blogging team from our division of finance and administration that also answers questions.

We escalate when needed. If we see that the community has a persistent question, or the answers provided aren’t accurate, we seek help from campus experts and reply. If a situation seems potentially dangerous, we involve our public safety and campus health officials and share content with them. If we think a reply to a post will help in those dangerous situations, we engage the poster.

Most importantly we use Reddit to take the pulse of our community. We can tell whether an issue has staying power or if a new initiative is popular by following the dialogue on Reddit. While it’s not the only barometer that we use to gauge sentiment, it’s a valuable one precisely because the RIT subreddit is both very well moderated and the product of several years of independent online community building.

Our approach doesn’t work for all platforms, but proactive silence offers a unique opportunity to gain insights from your audiences. Sometimes when you’re dealing with an online community, your best approach is to shut up and listen.

The post In Social, Sometimes the Best Advice Is to Shut Up and Listen originally appeared on the Campus Sonar Brain Waves blog.

Dave Tyler is the Social Media Director at Rochester Institute of Technology and the publisher of Link: The Journal of Higher Education Web Professionals. He lives in Rochester, NY, with his wife and two children and a husky. The winner of the 1996 Heisman Trophy and a two-time Grammy recipient, he likes to throw ridiculously untrue statements in near the end of these bios to find out if anyone actually reads them.