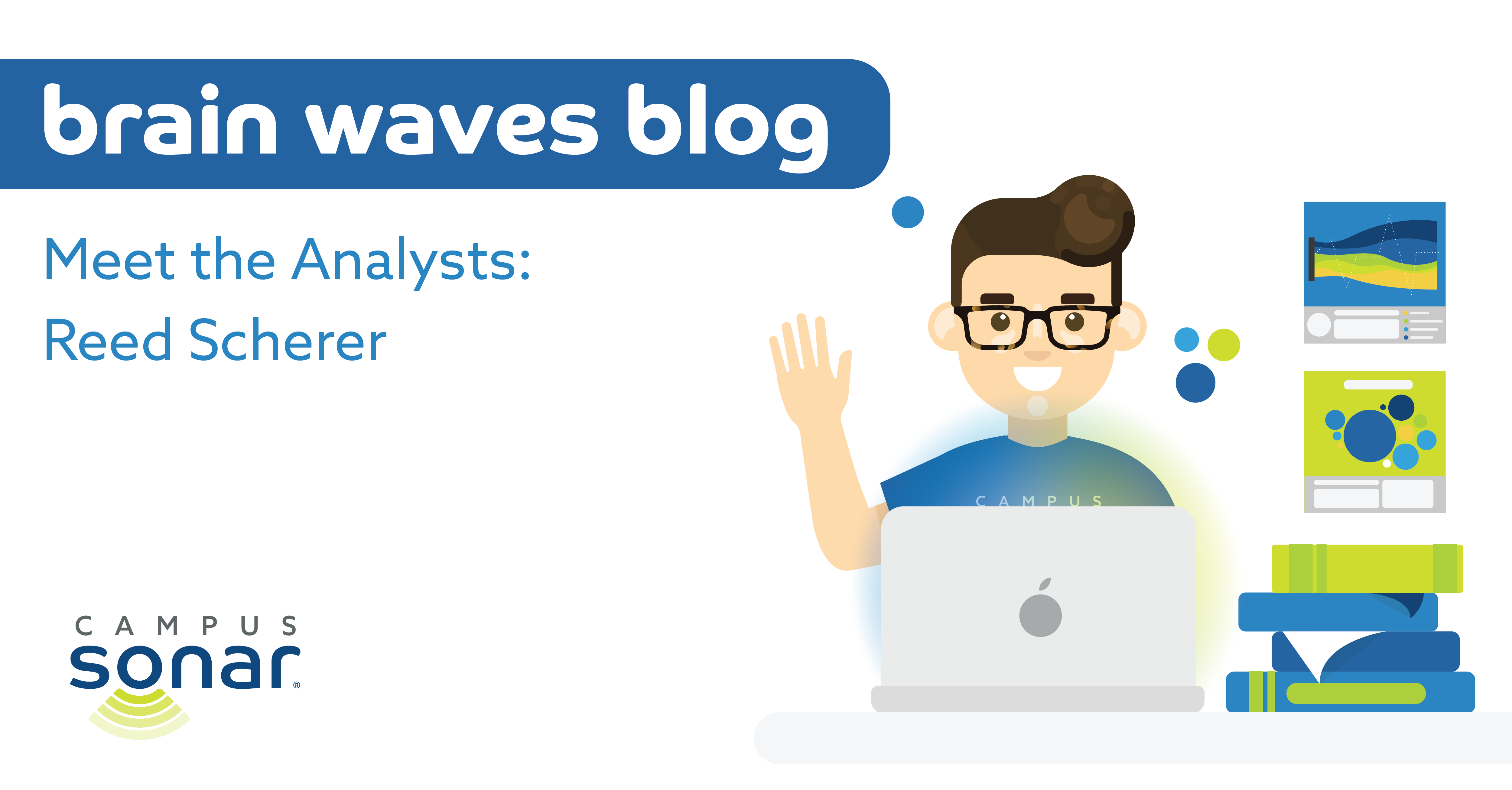 What I like about working with Reed is that he is simultaneously highly analytical and conscientious. I think you’ll understand what I mean after you read his answers to the questions below. And his experience says the same thing: over the years, he’s worked with people of all ages mentoring and coaching them as well as dedicated his expertise as an accounting manager and social listening analyst. Some may consider Reed to be equally right brain and left brain, but whatever you may call it, it means that Reed brings both skill in analysis of social data as well as a unique ability to communicate the human impact of his work. Academically trained as an economist at school, Reed is your go-to for big picture questions, anything basketball related, and about his cat, Joe.

Since you’ve started working at Campus Sonar what have been your biggest discoveries or things you’ve learned as an analyst?

I’ve learned that there’s never just one way to tackle a problem. The beautiful thing about social listening is that it’s really not a science; it’s a method that allows us to ask a broader question, break it down into segments, and develop insights and ideas from our findings. There are certainly tactics and procedures that we discuss as a team in order to maintain a consistent result, however everybody has a different way of getting there.

What’s one thing about social listening that you think everyone should know?

On a day-to-day basis, we look at a ton of data, but the thing that differentiates our data from that of a statistician, for example, is that each and every online mention we examine is deeply human. It’s definitely important to quantify the content we see online, but for us to better understand the origins and effects of certain online trends we really need to understand the people behind the content and the people who read it. The Campus Sonar research team is, at its core, an analytical team, but we never lose sight of the voices behind what we’re reading.

What’s something unique that gets you excited (either in social listening or real life)?

I get excited when I see things come together, both in social listening and in my life. In social listening, we tend to see small bits of data and insights that seem unrelated to each other. However, as we build upon our knowledge of a topic or a client, we connect these points in order to build a narrative and truly explain the root of an issue or question. Similarly, some of my favorite hobbies fall under this same principle; when cooking, I get to see different flavors come together to make something greater than the ingredients themselves; or in basketball for example, a team’s coordinated movements and passes can space the floor and create scoring opportunities against even the toughest defenses. Either way, it’s deeply satisfying watching smaller actions or outcomes combine to create something truly unique.

Learn more about Reed and his love for cooking and basketball in his blog posts and by following him on Twitter. Also, catch up on what analyst Amanda Jeppson nerds out about and coming later this month, more on Sarah Marks and her quarantine obsessions.