There’s a new kind of crisis on campus—the social media crisis. You know the one, the email interaction that gets posted to reddit, the tweet-gone-awry from an official account, or the local news story that catches the eye of someone influential online. Before you know it, a snafu that might have slipped under the radar in the past has sparked a national conversation, and there are literally thousands of people talking about the campus every day.

A recent example occurred when two baristas working at Joe Van Gogh, a coffee shop on the Duke University campus, lost their jobs after a member of the Duke faculty observed “inappropriate” music being played on the barista’s Spotify account. Over the 10 days following the incident, there were 32,000 mentions of the crisis online. By comparison, only 1,500 mentions of Duke University and Joe Van Gogh combined (the two organizations involved in the incident) occurred in the previous 10-day period. That’s an increase of 2,033 percent! I decided to monitor this social media crisis to see how it all played out.

When Campus Sonar monitors a crisis, we collect data on six key crisis metrics. If we’re providing this analysis to a client, they can use it to inform a variety of strategic responses, such as the following.

Full disclosure: Duke didn’t hire Campus Sonar to provide crisis monitoring services. I caught wind of the crisis through our regular social listening and jumped at the opportunity to investigate publicly available online conversations around the incident. Our strategist also shared some insights that may have been valuable to Duke at the time.

On May 9, there were 7,163 mentions (more than twice as many compared to the previous day). This spike is attributed to individuals sharing the story on social media platforms. Articles about the incident were initially published on May 8, so it makes sense that a day later there would be an increase in publishing and sharing articles and commenting on the incident. 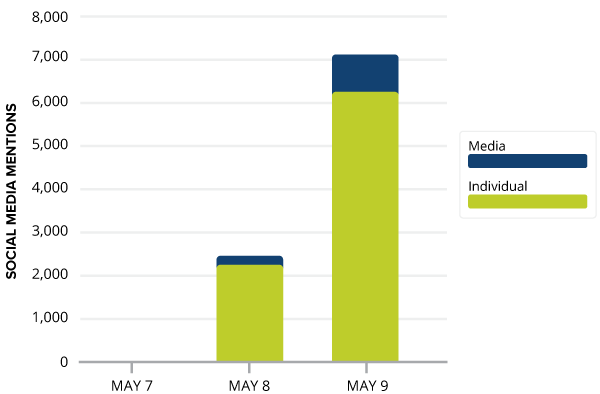 As a campus partner, we listen for conversations that may impact a campus brand. Due to the timeline of events paired with a high level of conversation analysis powered by social listening, we would have helped Duke understand and react accordingly to the swell of early response on social media.

In the same breath, Larry Moneta's white fragility caused a Black woman (and her white co-worker who was next to her making drinks) a source of livelihood because the rap song playing at @joevangogh coffee shop at @DukeU was "inappropriate." This is an outrageous ABUSE OF POWER. pic.twitter.com/rn6xyFB43E

Larry Moneta said he'd always defend freedom of speech but he got a black woman fired for playing a rap song in a coffee shop. So the N word is okay when it's written on campus dorm doors and spoken to students directly, but not when it's music making u uncomfortable? https://t.co/qhtwKrdERa

Insights taken from conversations like these, along with the early public reaction to the news, may have prompted Duke to reach out to Joe Van Gogh to work together for a joint authentic and early apology on May 8. The apology could have been offered in person to show remorse for the way the situation was handled. In addition, they could have provided the individuals who were fired with offers of employment and compensation for lost wages.

A proactive approach with a united front may have mitigated negative reactions on social media. The increasing conversation on May 8 with no action from either party may have contributed to increased negative social reaction on May 9. The analysis of conversation trends paired with an early response may have positively impacted the tone of the crisis conversation.

There was a sharp decline in mentions after that, showing that the crisis was quickly fading from the public eye. However, on the afternoon of May 10, Young Dolph, the rapper whose song was playing during the incident, made an announcement at a festival. He flew the two baristas to his concert in Florida and gave each of them $20,000. Stories about the gift were published over the next couple days, leading to a spike in conversation around Young Dolph’s involvement on May 12.

The May 12 conversation about Rolling Loud and Young Dolph didn’t necessarily invoke Duke by name. Duke’s decision not to engage with this portion of the conversation was likely the right move.

After that, conversation slowed drastically, until it tapered off about a week later.

Share of voice is a metric measuring the conversation volume that mentions specific individuals or organizations affected by the crisis. To evaluate share of voice, I identified the major players in the incident—Duke University, Vice President for Student Affairs Larry Moneta, Joe Van Gogh, rapper Young Dolph, and the two baristas, Britni Brown and Kevin Simmons—and analyzed how many conversations specifically named each individual or organization. 95% of all conversations named at least one of these major players. Note that multiple individuals/organizations can be named in a single mention; therefore, the categories are not mutually exclusive.

While both Duke and Joe Van Gogh were involved in the crisis, Duke is far more connected to the incident in the eyes of the public. This could be because Joe Van Gogh opted to cut ties with Duke in the wake of the incident, which was viewed favorably by the public. Duke’s official statement wasn’t well-received by the public, causing more outcry, and ultimately contributing to more mentions asking Duke to take additional action.

The strong connection between Duke’s brand and the incident, paired with conversation themes of racism and inequality, suggests that an authentic apology addressing the public’s concerns directly may have positively impacted the conversation, potentially with more positive mentions and/or a decrease in conversation. Ultimately, this approach may have decreased protests, and strengthened the relationship between Duke and Joe Van Gough, preventing them from cutting ties. 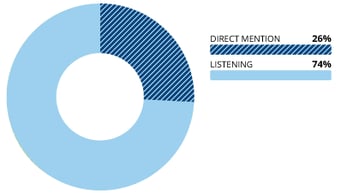 People were calling for change at Duke University, with hashtags like #firemoneta, #firecoffey, and #DismantleDukePlantation trending during the crisis period. Other common hashtags were #rollingloud and #rollingloud2018, the music festival where Young Dolph announced his gift to the fired baristas.

The Power of Social Listening in a Crisis

The level this incident escalated to was less about the actual coffee shop encounter and more about the public’s reaction on social media.

The reaction is ultimately what the story became, showing a clear disconnect between actions taken by the university staff and the public’s perception of what was right. Social listening throughout the incident would have allowed Duke to be ahead of the crisis and issue, acknowledge the real conversation, and issue important and authentic early apologies.

Lindsey Hinkel is a marketing professional, data nerd, and Netflix binge-watcher. She has several years of experience using social listening in the higher education industry. You can find her on Twitter—but be warned; most of her tweets are about her dogs, her daughter, or her (very strong) feelings about The Bachelor franchise.